The Australian Football League is the most popular sporting competition in one of the world’s greatest sporting nations. It is also a huge drawer with punters all over the country, and online bookmakers offer an enormous range of AFL betting markets as a result. BettingSite.com.au will walk you through everything you need to know about gambling on Australian footy, including which betting sites offer the best AFL odds and customer service.

After breaking their decades-long AFL Grand Final drought, Melbourne will start as favourites to win the 2022 AFL Premiership title. The Western Bulldogs will also have plenty of backers following their runner-up effort in 2021, while the Brisbane Lions, Geelong and Port Adelaide are expected to be there or thereabouts once again. It will be interesting to see where the likes of Richmond and West Coast sit by the time the 2022 campaign kicks off, and there is sure to be some interest in the likes of Essendon and St Kilda at odds.

Much like the one before it, the 2021 AFL Premiership will go down as one of the most testing footy seasons since the Second World War. COVID-19 outbreaks all over the eastern seaboard led to mass disruption in the second half of the campaign, including the relocation of the AFL Grand Final for the second year in a row.

From the start, it was clear that the AFL ladder would look a little different this year. After four rounds, only Melbourne, the Sydney Swans and the Western Bulldogs were undefeated – and of those three, only the Doggies (7th) had made the top eight in 2020. By the halfway mark, it was clear that the Demons and the Dogs were the teams to beat. Nevertheless, the likes of Geelong and Port Adelaide had opportunities to snatch the minor premiership, and some big results in the last few rounds of the home-and-away season set things up for an entertaining finals series.

While the Demons finished top of the ladder and the Bulldogs had to win through from the bottom half of the eight, the mid-season assessment proved accurate as they lined up against one another in the 2021 AFL Grand Final at Perth’s Optus Stadium. Both teams came in off resounding victories in their preliminary finals, so it surprised nobody that there was nothing to split them in the first half. The Doggies started the brighter after the main break and quickly kicked out to a three-goal lead, but Melbourne responded with a 16-goal blitz to claim their first flag since 1964.

At the other end of the spectrum, it was a tough campaign for some of Victoria’s grand old clubs. Richmond, after four years of dominances, missed the finals and waved farewell to several of their long-serving premiership stars. Carlton were tipped to improve after some big-money signings, but the Blues never got going and David Teague lost his job as a result. Collingwood reached the semi finals in 2020, but a rough start to 2021 saw Nathan Buckley step down as the Pies slumped to 17th place.

Meanwhile, there were some notable improvers. Sydney finished 16th on the ladder in 2020 and were expected to struggle again, but they bolted out of the gates and finished sixth on the ladder, level on points with the fourth-placed Brisbane Lions. There were dire concerns about Essendon’s future coming into the 2021 season, but a revitalised Bombers side bounced back to make finals while unearthing a few stars in the process. And although North Melbourne took out the wooden spoon as expected, there were signs in the back half of the season that the Roos could be competitive in the coming years.

Many of the top AFL bookmakers will offer premiership markets all year round on this domestic Australian sport. This means when the AFL season concludes in late September, AFL betting sites will then have markets available on who wins the next season, and popular futures markets like the Brownlow Medal, Coleman Medal and who will make the eight.

The top AFL betting sites generally have apps available, with these able to be downloaded on iOS and Android smartphones, and giving you access to everything you could possible need at an online bookie. This includes all of the bookmaker promotions surrounding the AFL, full suite of bookie deposit options and even live scores.

One of the most popular additions at Australian AFL betting sites in recent times has been the addition of same game multis as a bet type. This essentially means you can put more than on bet on the same ticket, giving you some big payouts for relatively small outlays. This is just one way AFL bookmakers have continued to improve in recent times.

AFL betting sites are prevalent in Australia, but they are no all created equal. The following Australian online AFL bookmakers are the best for the 2022 season.

** Our Australian bookmaker reviews are written by industry expert, with no ties to the betting sites that we are writing about.

What can I bet on during an Australian rules football match?

AFL is unlike almost any sport in the world to bet on as it has a multitude of options to wager your money on. Just about every category that has statistics recorded can be bet on prior to a match.

Wagering on most disposals, usually consisting of 12 players spilt into two separate groups, is one of the more popular bets. Other bets pertaining to possession tallies also exist, with totals of 20, 30 and 40 available to wager on with varying returns based on the player’s average and output.

Other interesting statistical categories you can bet on include most tackles which splits players into two groups similar to most possession groups, total game score which has an over/under market, quarter by quarter leaders and most marks.

Once the match has commenced, however, the majority of the options dry up, with the regular head-to-head and line betting typically the only options unless it is a special occasion such as ANZAC Day, the Grand Final or a state derby where the medal winner bet will be available all throughout the match.

There are currently 18 teams in the Australian Football League – 10 from Victoria and two each from New South Wales, Queensland, South Australia and Western Australia.

Finding value in AFL matches differs greatly from most other sports punters bet on, in that there are so many variables on which to bet on, and mitigating circumstances that can affect the outcome of a match.

Invariably the big matches throughout the year, such as the ANZAC Day game, the Western Derby and the Showdown may have a clear-cut better team that has a superior ladder position, but these emotion-charged matches do not always reflect where the two teams currently stand in the pecking order. 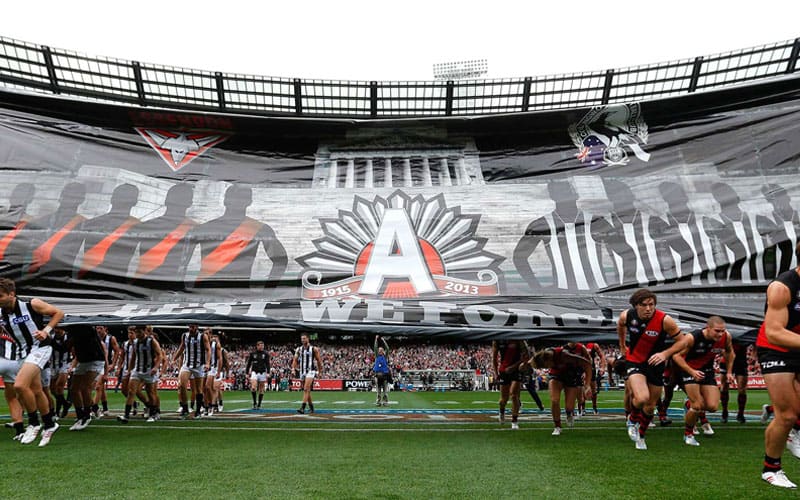 However, value can almost certainly be found if you are looking to delve into statistics and player averages.

You will often come across a player that for some reason or another matches up quite well against an opponent – especially a forward – and has made a habit of kicking bags of goals.

This makes for an astute most goals bet, and can sometimes derive extra value from the fact that not everyone is prepared to put the effort in to find a winner.

Most websites have multiple options for you to deposit your money:

Can I bet on AFL internationally?

Australian Rules football does not differ from any other sport in the world in that there are no restrictions on whether you can gamble on Australia’s most popular game.

With sites such as Bet365, you will always have options to bet on AFL – no matter where you are in the world.

The 2022 AFL Grand Final will take place on the last weekend of September at the Melbourne Cricket Ground in Victoria, Australia. While last year’s decider was the first to be held outside Australian footy’s home state, normal service will resume in 2021 – depending on the status of the COVID situation, that is.

Aussie bookies such as Sportsbet and BetOnline offer both phone and live chat customer service to anyone who is having trouble placing a bet.

The live chat is ideal for people on the go that want real-time knowledge that they can insert into their betting slip, but is only operational during their standardised hours, typically 9am to 10pm Eastern Standard Time.

The phone customer service gives punters who want the more personal touch the opportunity to speak to a real person in real-time. Note: due to live-betting legislation in Australia, it is only possible to place a live bet on a match over the phone.

The phone service for all Aussie online bookies is 24 hours a day, seven days a week, and will be able to help you in every situation, including when the online site is down for maintenance.