Set your own odds and if someone is willing to take the bet, you're on. Australia's only betting exchange.

SIGN UP
Due to regulatory changes no signup offers or promo deposit bet bonuses are legally allowed to be offered to Australians.
Payout
BANKING METHODS +more
Support

This Betfair review is talking about the Australian betting exchange Betfair.com.au, one of the few betting sites that has a significant point of difference to their competitors. Reviewing Betfair we quickly realised it would take more time than the average bookmaker, but we also soon worked out there are many benefits to using a betting exchange.

Launching in the United Kingdom in 2000, it didn’t take Betfair long to become one of the most recognisable betting sites in the world today.

After an incredible rise in its infantile years – which saw them win Britain’s highest business honours – Queen’s Award for Enterprise – Betfair obtained licences offshore, first in Malta and then in Tasmania in 2005.

This means Betfair is the only betting exchange that holds an Australian bookies licence.

The thing that separates Betfair from the other bookmakers is that the customers call the shots on the bets.

Users are able to set the odds on a certain runner and other users will elect to take those odds, meaning the money is exchanged between punters rather than getting paid out by the bookmaker.

It all sounds good, but does Betfair provide a service that makes it worth the switch for new customers? We have taken a comprehensive look at Betfair in our review. 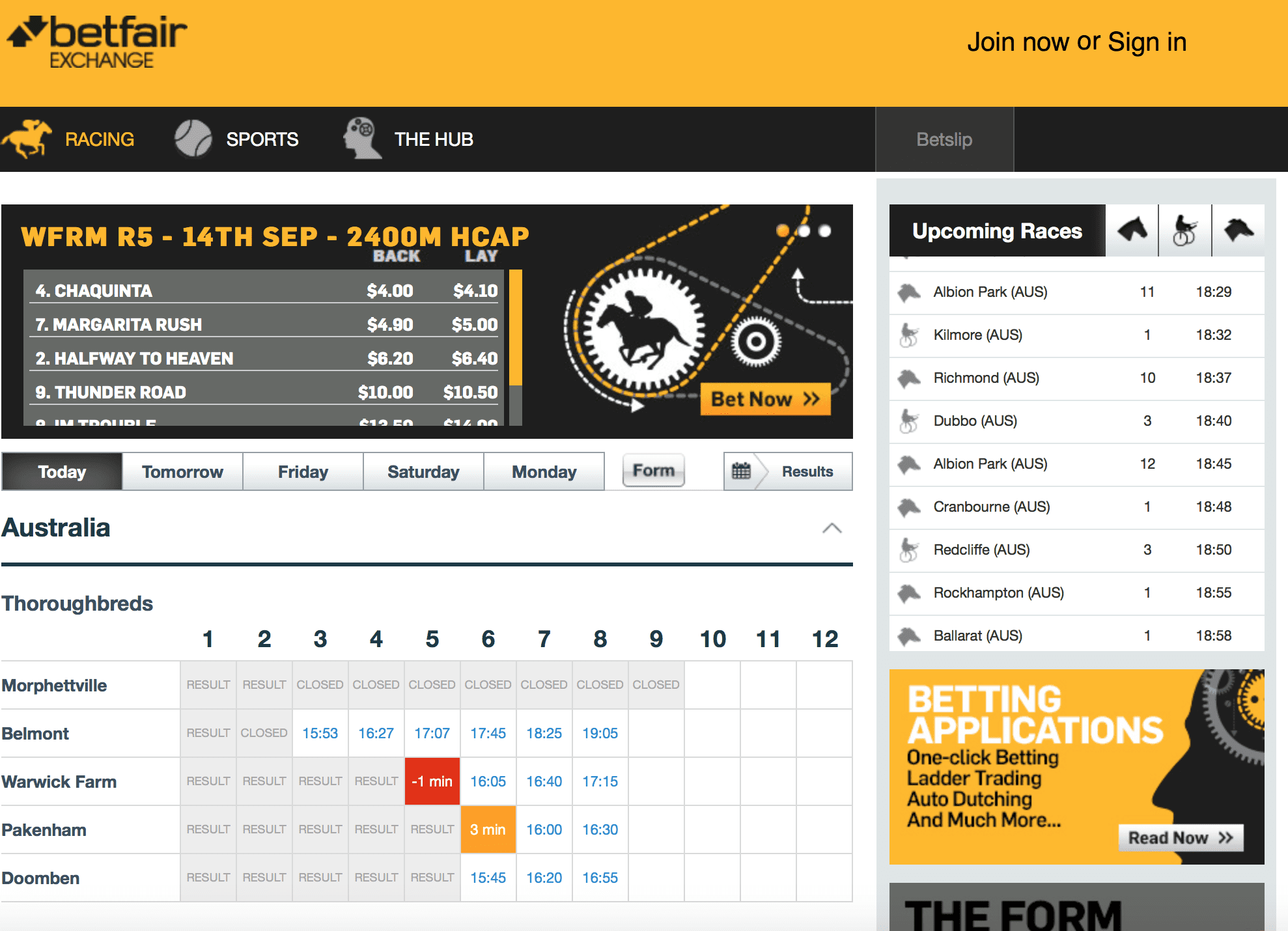 Betfair exchange – what exactly is it?

The Betfair AU exchange can be an intimidating concept, but it is a simple one to grasp; the Betfair clients set the odds they want and it is up to the other users to go ahead and take them on.

This means you could elect to put up odds of $5 on a horse paying $3 on the three totes, and if there is a user out there prepared to match your bet you will get a return if it is successful.

If no other user chooses to take the odds you have provided, you will have your stake returned once the race has started.

Obviously on the other end of this, punters can look at the bets offered on Betfair.com.au and the odds offered.

Back and Lay system at Betfair

One of the unique aspects of the Betfair AU exchange is the back/lay system.

Backing a team/horse works exactly as it would at any other bookmaker, meaning if the odds are advertised at $3.40 for a team to win, if you put $100 down you will get $340 back if your bet is successful.

A lay bet is the opposite – you are backing a team to lose.

A lay bet though is a little different, as you are going up against a fellow Betfair client, which means you are effectively taking on the role of the bookmaker.

If the team you go up against wins, you lose $240, while any other result would give you a win of $100 minus a commission fee.

Betfair charges commission fee on your net winnings on each market, which means if you have a net loss on a market you do not pay a commission.

The standard commission is 5% for sports and 6.5% for Australian racing.

A commission discount of up to 60% is applied based on how active you have recently been on the exchange.

You can login to the Betfair mobile website at Betfair.com.au.

The Betfair mobile offering, like all of the best online bookies in Australia, is almost as good as their desktop version. Plenty of money has been invested making sure the website is fully functional and easy to navigate on both smartphones and tablets.

Australians are lucky in that they can download the Betfair app for Apple smartphones and tablets directly from the App store, after they have created a new account. Basically this app is approved by Apple and the Australia betting regulators and it gives you unfettered access to all the services betfair has to offer.

Utilising yellow and black, Betfair stands out from the pack due to the fact no other bookmakers use yellow as a predominant colour.

At the top users are given the three options – racing, sport at the hub (which is an information service provided by Betfair including form, articles, statistics and how-to guides).

Clicking on any of these options will bring up the chosen section, taking you to a full list of events of that day, but hovering over the drop down menu will allow you to select the specific race meet or sport you are after.

On the right hand side of the page is the next to go section, which differs slightly from other bookmakers given you can scroll all the way down through meetings throughout the day and into the night rather than only seeing the next handful of races.

Next to go can also be separated into a specific style of racing, whether it be thoroughbred, harness or greyhound racing.

The middle of the page is dedicated to racing.

Tabs at the top can take you from today’s meetings or tomorrows, show you the form or the results of the races that have taken place today.

Down below every race for the day is shown in order of the meets. Thoroughbred racing is first, then harness, then greyhounds.

Every race card displayed is split into the amount of races each one has, and the start time is shown. Once the race is within a five minute start time a countdown clock will begin and after the race has been run and won “RESULT” will be displayed in the time countdown’s place.

Meets are set up according to the country the race is taking place, so if you want to bet at the Vaal you would go to South Africa, Royal Ascot you would go to the United Kingdom and so on.

The sports you can bet on at Betfair are compare pretty well to most other bookmakers, but the racing is where they truly excel.

No other bookmaker in Australia provides the about of races that Betfair does, which includes a multitude of race cards from all around the globe.

One confusing aspect for punters is the wallet system Betfair utilises.

Both wallets use Australian dollars and members can transfer money between the two with just a few clicks, meaning this can be an annoyance, but not too impactful as to sully the overall experience.

Betfair Australia has a number of different deposit methods available, which allow you to fund your account instantly. The best betting sites in Australia have multiple banking options and Betfair is no exception, although there is one notable exclusion that is very popular in Australia — Paypal. The deposit options available at Befair.com.au include:

Betfair AU clearly states that customers cannot deposit via cheques or 3rd Party Payments, which in essence means you cannot deposit into someone else’s account. This is standard practice across the industry.

Cashing out at Betfair AU

We went into writing our Betfair review with an open mind, understanding that this betting company is a little bit different to its competitors. Betfair AU offers a unique experience — the feeling and power of being a bookie, which is something that other bookmakers cannot do.

The Betfair website itself is easy to navigate but weighs heavily towards the racing side of wagering rather than the sports, which is not necessarily a bad thing but it just means a little bit more digging needs to be done to find the sporting code you are after.

The mass of racing options is a terrific aspect of the Betfair experience and something that almost every other bookmaker in Australia cannot compete with. This reviewer’s passion is horse racing and I was not disappointed with what Betfair AU had to offer.

Having said that, there are a few kinks that Betfair Australia should iron out.

The wallet system can be irritating. Late at night Australia punters are switching back and forth between Australian and overseas racing almost minute-to-minute, meaning punters will need to have their wits about them in regards to transferring cash from wallet to wallet.

Another is the lack of a Paypal deposit option for those punters who utilise the service.

These are only small issues we discovered when writing our Betfair review that pale into insignificance when stacked up against the service they do provide.

In conclusion, if you take your horse racing betting seriously, opening a new account at Betfair.com.au is a must.