Looking to have a bet on some of the awards that are presented in the AFL but not sure where to start or what they are? Then look no further than our AFL medal betting guide, which will give you information on all the medals you can bet on, what they are, when they are awarded and all the criteria that goes along with it so you can make an informed decision before you put down your hard earned.

Australians have multiple options when it comes to betting at online bookies, particularly on our national sport, AFL. The amount of betting options is truly staggering and whenever one of the prize medals we speak about below is on offer they lift the markets to an even higher level. While there are many bookies offering betting on these exotic markets we believe the following are the best:

How to bet on AFL awards markets

From season-long futures to matchday markets, there are dozens of ways to bet medal winners in the AFL. Open the tabs below to find out more.

How is it awarded? The votes are allocated by the officiating umpires of the match in a 3-2-1 system, with three votes going to the best player afield, two to the second, one to the third.

When is it awarded? The medal is awarded each year on the Monday prior to the AFL Grand Final. 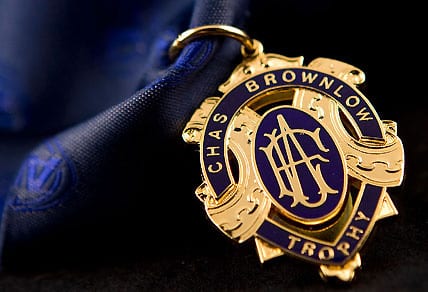 Where to place an AFL medal bet

There are many sites that take bets all year round on popular AFL markets like the Brownlow, Coleman and Rising Star medals, while the specialist awards relating to either the Grand Final or a particular match throughout the year, like the Showdown, have markets leading up to the game.

Sportsbet.com.au is one of the go-to sites for sports betting in Australia. With a multitude of options, including exotic wagers on the Charlie, Coleman and all the other medals, Sportsbet is your best bet for a punt on the AFL.

Along with a plethora of options Bet365.com.au has all year round voting on the Coleman, Brownlow and rising star, and has all your bases covered when it comes to the Derby, Showdown, or ANZAC Day clashes.

Last, but not least, is the AFL’s official betting partner. BetEasy.com.au carries thousands of AFL betting options during the season and runs futures on all the major footy awards.