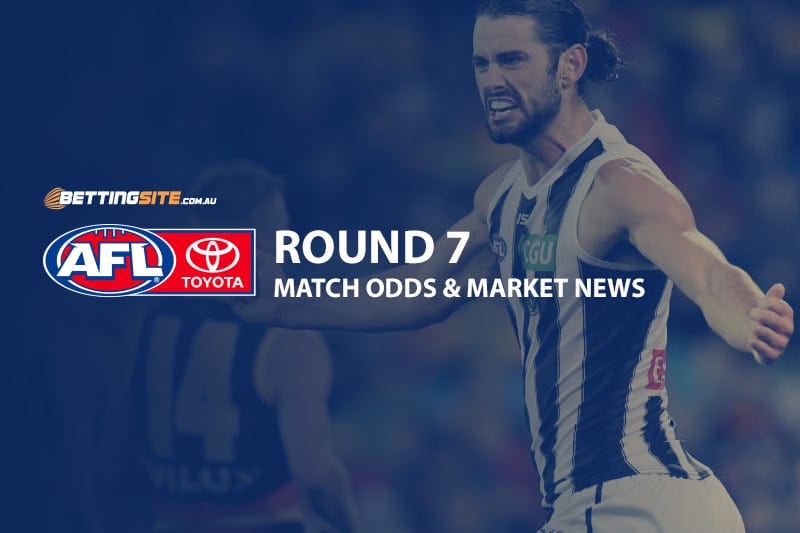 Australian rules footy will once again be played all across the country outside of Victoria, with several matches this week that could heavily affect the 2020 AFL Premiership betting market. Here is a sneak peak at round seven, including the latest odds from Sportsbet.com.au.

The AFL has done a brilliant job putting the most important games in the best timeslots, and this Thursday night blockbuster perfectly demonstrates what football fans want to see.

Both the Geelong Cats and Collingwood Magpies are in good form and sit comfortably inside the top eight, but their premiership ambitions will be tested when they meet at Optus Stadium.

The last time these teams met was the 2019 qualifying final, where the Pies snuck over the line by 10 points. They start as $1.71 favourites here, making the Cats enticing outsiders at $2.15.

These two Victorian rivals will meet at Metricon Stadium to settle their differences this Friday night.

Having gone down to Carlton by 52 points in round six, the $1.96 Western Bulldogs need to come out aggressively this week and make a statement.

With Dylan Shiel suspended and Conor McKenna in doubt with a fractured finger, the $1.84 Essendon Bombers might need to bring in some pace.

We love a good clash between two premiership contenders, and this contest between the GWS Giants and Brisbane Lions will give us with exactly that.

Brownlow Medal favourite Lachie Neale will go against the likes of Josh Kelly and Stephen Coniglio in the midfield, while the battle between Jeremy Cameron and Harris Andrews in GWS’s forward 50 should be a belter.

The Giants have the edge at $1.72 despite their loss to Port Adelaide last week, leaving the Lions as juicy $2.10 underdogs as they look to bounce back from their loss to Geelong.

There is not much to like about the $2.15 Sydney Swans this week, but that is certainly not the case for the $1.68 Gold Coast Suns.

Izak Rankine received the AFL Rising Star nomination for his stunning debut last week and is now priced at $4 for the award behind St Kilda’s Max King, who is the $3.50 favourite despite not yet being nominated.

Isaac Heeney is out for the season and Josh Kennedy will miss a chunk of footy with a knee injury, so this is Gold Coast’s game to lose.

The reigning premiers are $1.55 favourites for this clash but will need to up their scoring output if they want to make it three wins in a row, as they only managed 34 points against the Swans last Sunday.

The Roos are suddenly in a spot of bother after three consecutive defeats, but there may be some interest in Rhyce Shaw’s men to spring an upset at $2.39 odds.

We wouldn’t be surprised if the Carlton Blues followed up their excellent win over the Western Bulldogs with another victory this week.

They are $2.76 outsiders for Sunday’s clash with the Port Adelaide Power, who maintained their grip on top spot with a solid win over the GWS Giants last week.

Two of the least inspiring teams in 2020 will need to bring a spark to Giants Stadium as they look to get their respective seasons back on track.

Even with Jonathon Patton unavailable, the Hawthorn Hawks start as $1.75 favourites to bounce back from their disappointing displays against the Giants and Magpies.

That leaves the Melbourne Demons at $2.08, which is interesting when you consider they beat the Suns last week.

A bumper crowd of up to 30,000 is expected at Optus Stadium to watch the Fremantle Dockers and West Coast Eagles do battle in the latest edition of the Western Derby.

The Dockers bring the winning form to the table after clutch wins over Adelaide and St Kilda, while the Eagles are also back in business following their horror run from the restart.

Surprisingly, the $2.98 odds for Freo are round seven’s longest so far, making West Coast the shortest favourites at $1.38.

Monday night football returns to close out round seven as the Adelaide Crows head home in search of their first win of the season.

Their two wins over St Kilda in 2019 will give the South Australian stragglers some confidence, as will the Saints’ capitulation against Freo last weekend.

Nevertheless, Brett Ratten’s men are paying only $1.36 to upstage the $3.08 Crows at Adelaide Oval.

Nathan Buckley’s Magpies are back on top of the market following a strong win over the Hawks, but Leon Cameron’s Giants are right there with them despite losing to Port Adelaide.

Even though they sit 11th on the ladder, the West Coast Eagles are third in the market as they embark on a run of consecutive fixtures in Perth.

Keep an eye on Geelong at $11, as a win over the Collingwood Magpies this Thursday night could see that price drop sharply.