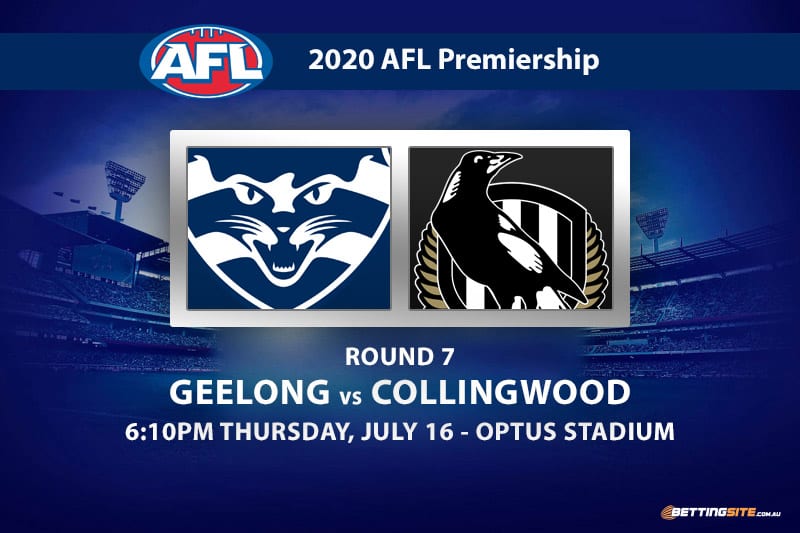 Two of 2020’s potential premiership contenders will meet at Optus Stadium when the Geelong Cats and Collingwood Magpies clash this Thursday night.

This will be the first time these teams have met since their 2019 qualifying final, when the Pies edged out the Cats by 10 points.

Geelong will need to find a pair of midfielders to replace the likely outs of Mitch Duncan and Quinton Narkle, who both suffered soft-tissue leg injuries in last week’s comeback win over the Brisbane Lions.

Collingwood’s debutantes were impressive in the win over Hawthorn, but Will Kelly finished the game with a fractured arm and will miss the rest of the season as a result.

In better news for the Pies, Jamie Elliott and Matt Scharenberg should both be cleared to play despite picking up knocks against the Hawks.

They could also regain the services of Jordan De Goey, who should be well settled in the Perth hub after skipping the trip to Sydney last week.

With Mitch Duncan and Quinton Narkle possibly out this week, Patrick Dangerfield will need to shoulder more of the midfield burden. The 2020 Brownlow Medal prospect has enjoyed a great season so far, and this is an opportunity for the superstar to rack up plenty of ball and a vote or three.

Critics will question how much Adam Treloar is impacting matches, but the Collingwood midfielder has been strong in his first two games back from injury. Having collected 30 or more touches in 12 of his last 15 games, including his two this year, we trust Treloar will deliver again this week.

Now 14 years into his AFL career, Tom Hawkins is still one of the most consistent key forwards in the competition. Hawkins is a specialist in Western Australia, where he has kicked 30 goals in 13 matches. The big lad from Finley averages three goals per game at Optus Stadium and loves the matchup against the Pies.

A wet night is expected in Perth this Thursday, meaning players that flourish in the rain need to be considered. Jaidyn Stephenson has kicked plenty of goals in the wet, including a haul of three against Essendon in round five. Stephenson is building each week and could be poised for a big one in the near future.

With wet weather expected, this should be a slugfest with lots of tackles and stoppages. Most AFL betting sites had the total points line set at 102.5, but we think this match will go well under that figure. If you need more convincing, each of the last nine clashes between the Cats and Pies have gone unders for total points.

Collingwood to win by 1-19 points

Even without Steele Sidebottom, who still has two weeks of suspension to serve, the Magpies are our choice to win in Perth. They have travelled well in recent years and last week’s win over the Hawks showed some good signs. The Cats will struggle more than expected without Mitch Duncan, as he is crucial to their ball movement through midfield.