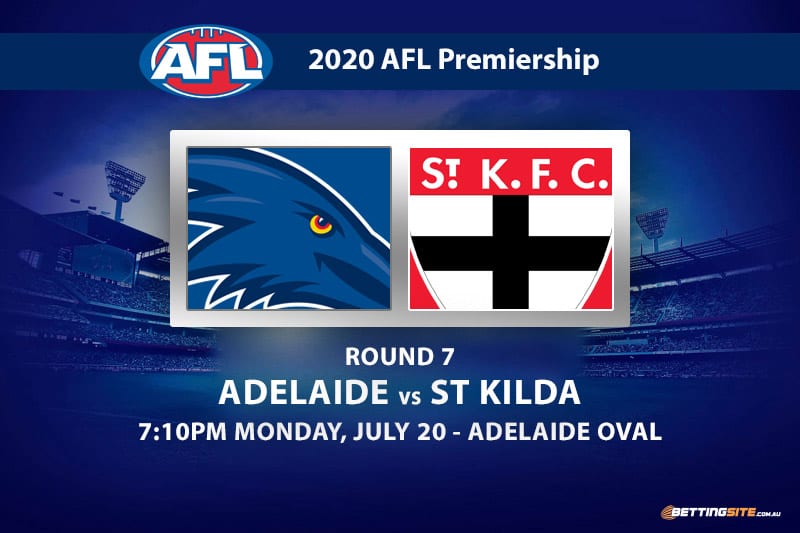 Football returns to South Australia with the Adelaide Crows hosting the St Kilda Saints in the first Monday night game of the 2020 AFL season.

The Crows are rock bottom after six straight losses in their Gold Coast hub, while the Saints want redemption after blowing a six-goal lead against Fremantle.

Taylor Walker is reportedly ready to return for Adelaide, but club captain Rory Sloane will miss the next month with a hand injury.

St Kilda coach Brett Ratten has every right to wield the axe at selection this week, but he may only need to make one move to replace the suspended Ben Long.

Both teams have enjoyed extended resting periods, as the Monday night scheduling allowed each side a nine-day break after round six.

Will the Saints redeem themselves after their horror week, or will the Crows secure their first win of the season?

For all of Adelaide’s woes this season, the Crouch brothers have been putting up pretty good numbers. Brad is averaging a smidge under 25 touches per game since the restart, so there is no denying his ability to find the ball even when his team is struggling. With Rory Sloane out, look for the elder Crouch to lead the midfield this week.

Hunter Clark has only played the Crows once in his career, but he finished that match with a career-high 26 disposals from less than 80 percent game time. Clark has gone close to 20 disposals several times this season, and we think this is a great opportunity for him to find some loose ball against the struggling Crows.

Coming back into the squad this week, Taylor Walker needs to provide an avenue to goal. Walker has kicked 11 goals in his last three matches against St Kilda and will need to build on that form line if the Crows are to have a chance this week. We think the former captain stands up while his Rory Sloane is sidelined.

The Adelaide Crows have found it hard to get started in 2020, while St Kilda is one of the best first-quarter teams in the competition. If the Saints get an early clearance and push forward with their pace, Max King is a very trustworthy target inside 50. If the young Rising Star favourite marks the footy, you can almost certainly put the goal on the board.

A quick game at the famous Adelaide Oval will result in a high-scoring match, as the big ground should provide enough pace for the Saints to play as fast as they like. If the Crows can hurt St Kilda on turnovers, they should also have the chance to kick a big score for the first time this season.

Having won their last five encounters against St Kilda, we think the Crows will put up an honourable fight here. The Saints are a very talented team but showed last week that they can be beaten by any side, especially if you can slow them down.