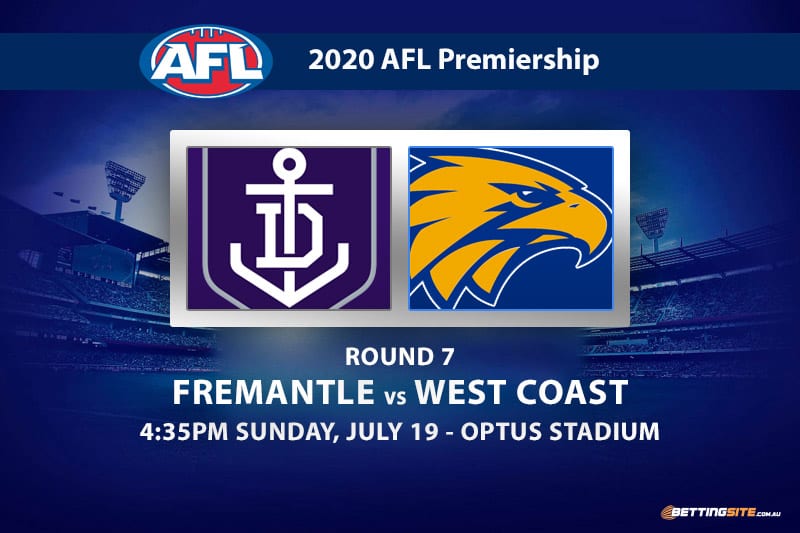 It might be some way short of a capacity crowd, but 30,000 fans will head to Optus Stadium this Sunday to see the Fremantle Dockers take on the West Coast Eagles.

There are few things better than a good WA Derby between these fierce rivals, and the singular nature of the 2020 AFL Premiership season makes this one especially hard to predict.

Bad news has already hit the Dockers, as two-time Brownlow Medal winner Nat Fyfe will miss the clash due to a recurrence of the hamstring injury he suffered a few weeks ago.

West Coast captain Luke Shuey has also battled a hamstring issue, but he returns for the Eagles after missing last week’s win over the Adelaide Crows.

Both teams return home to WA after hubbing on the Gold Coast and come into this game with two consecutive wins under their belt, but only one of those streaks can continue.

You need your most experienced players to stand up when the captain is out, and Stephen Hill is now one of the older heads in the Freo squad. Having returned to the side in round four, Hill started to show some form last week with 16 touches and six marks against St Kilda. Expect him to be the prime mover for Fremantle across half-back this week.

One of those chronically underrated players, Brad Sheppard has become a vital cog in the West Coast defence in recent years. He is a very safe user by foot and has lifted his output across half-back in the past fortnight. Averaging 26 touches in his last three Derby matches, we think Sheppard is great value to get 20 disposals.

It can be hard to find value when looking at goalkickers for the Dockers. Michael Walters and Matt Taberner are at short odds this week, which is why we like Rory Lobb. The former GWS prospect takes great marks inside 50 and has a new set-shot routine that seems much more effective than his old one.

Jack Darling has been the top goalscorer in each of the last three Derby games, kicking 10 majors in that run. After a slow start to the year, the talented forward seems to have found his shooting boots with back-to-back braces against the Swans and Crows. We expect Darling to step it up a notch this Sunday.

One huge factor that will affect this match will be the crowd. These guys haven’t played in a front of a genuine live audience for a very long time, so that alone should give both sides a boost. The Eagles are a high-scoring side when they get going, and they should post a large total this Sunday.

It is good that both sides found some form heading into this clash, but we only see one winner here. The Eagles have a better squad all-round and bring Luke Shuey back into an already impressive midfield. No Nat Fyfe is going to hurt the Dockers, who lost last year’s Derby by 91 points.