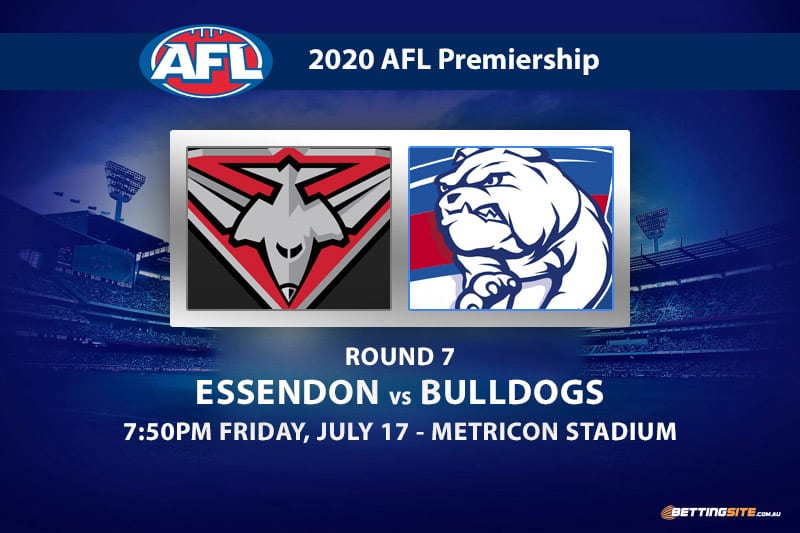 The gatekeepers of Melbourne’s west will go head-to-head on the Gold Coast this Friday night when the Essendon Bombers and Western Bulldogs meet at Metricon Stadium.

Victoria will stage no more matches in the 2020 home-and-away season, so these two sides had best comfortable in Queensland.

The Bulldogs have won each of their last five clashes with the Bombers while averaging 117 points per game, and that dominance was underlined in last year’s 104-point rout at the Docklands.

Dylan Shiel has been the best of the Essendon midfielders thus far in 2020, but he will miss two weeks following his suspension for a high bump on North Melbourne’s Curtis Taylor last round.

Conor McKenna came out of that game with a broken finger that required surgery, yet the Irish speedster is still a chance to suit up for his second start of the season.

Luke Beveridge announced this week that Cody Weightman, the no.15 pick in the 2019 draft, will make his AFL debut for the Dogs as they look to spark up their forward line after last week’s horror loss to Carlton.

With Shiel out for the Bombers, their other midfielders need to account for the 23 disposals he averages each week. Zach Merrett may not have the same burst of speed, but he is just as capable when the ball hits the deck in a contest. With no Shiel or Dyson Heppell, this is a week that Essendon’s no.7 must stand tall.

Lachie Hunter did not miss a beat on his senior return last week, racking up the most touches of any player on the ground while looking very impressive by foot. The Western Bulldogs vice-captain had 34 disposals last time he faced the Bombers and will enjoy the matchup without Heppell and Shiel in the midfield.

With Jake Stringer and Joe Daniher out of the picture, Anthony McDonald-Tipungwuti looms as the major threat in Essendon’s attacking 50. Great pressure around the contest, serious skills at ground level and a flawless set-shot routine give the small forward a deep and varied goalscoring repertoire.

None of the experienced Bulldogs forwards stood up in their loss last week, as key targets Josh Bruce and Josh Schache went goalless. Bailey Dale kicked a goal in that game and booted three last time he faced the Dons, so there is some value in backing him to score multiples on Friday night.

Fast starts have been a common trend throughout the 2020 season, with several teams averaging the most goals in the opening quarter of their games. This one has the potential to be loose and open in the early stages before the coaches tighten up their defences, which is a common trend for Essendon games this year.

Most AFL betting sites can’t split these two, but we are going for the Bulldogs on the back of their recent head-to-head record. The Bombers have held up extremely well this year, but we do not think they can win this one without Joe Daniher, Jake Stringer, Dyson Heppell and Dylan Shiel.