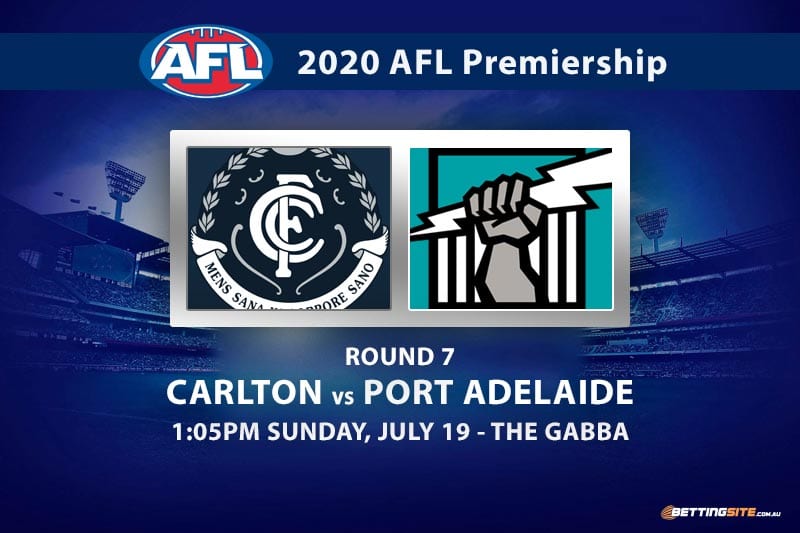 Two top-eight sides will do battle at the Gabba this Sunday when the Carlton Blues take on the Port Adelaide Power.

It has been seven years since the Blues last sat inside the top eight, but they ended that drought with a big win over the Western Bulldogs last week.

The Power have enjoyed their stay in Queensland, winning four of their five matches since the restart to go a game clear at the top of the ladder.

Carlton will not need to make any changes, as Patrick Cripps and Marc Murphy are both ready to play after suffering minor injuries last week.

Brad Ebert is serving a suspension for rough conduct and Cam Sutcliffe is out with a hamstring injury, making room for the return of Xavier Duursma and Tom Rockliff.

These two teams play an enjoyable brand of football that will guarantee a highly watchable match this Sunday afternoon.

Even though the Carlton co-captain hurt his shoulder last round, he should still be in line for a big game against the Power. Cripps is much taller than all the Port Adelaide midfielders, which will give him an advantage around the ground at stoppages. He only had 13 touches against the Dogs, but we can expect him to double that tally this weekend.

Running off half-back and creating plays is Darcy Byrne-Jones’ bread and butter. The exceptionally fit Port Adelaide defender had 27 touches against Carlton last season and started 2020 with back-to-back 25-disposal games, so there is enough form there to suggest he can rack up 20 or more this weekend.

Even though Eddie Betts has returned to his original club, the old rivalry with Port Adelaide still lives strong within him. The former Crow has kicked plenty of goals against the Power over the years, including two bags of four and two bags of five. Eddie was back to his best with four majors against the Bulldogs and will cause mayhem this Sunday.

Connor Rozee kicked two goals against Carlton last year in just his second game of AFL footy. Although he is yet to kick multiples in a match this season, Rozee is now a genuine star of the competition and will take some minding. If you fancy him for first goalscorer, you can get on at $19 with Sportsbet.

The forecast is clear, so we can expect prime conditions for a high-scoring affair. As both teams like to open up the ground and attack with speed, there should be plenty of action at either end of the ground.

We underestimated the Blues last week and didn’t give them the credit they deserved, but we still think Port Adelaide is the right choice this round. With Charlie Dixon and Robbie Gray inside 50, the Power have all the weapons to secure their sixth win of the season.