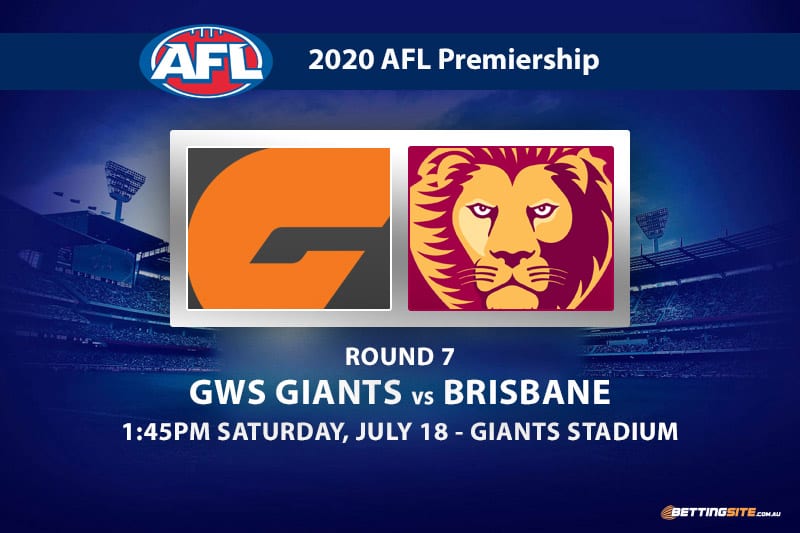 Saturday’s clash between the GWS Giants and Brisbane Lions is sure to have implications for the AFL finals later in the year.

As both sides are involved in the premiership race, this fixture could highlight which of these two expansion clubs is better prepared for a title tilt.

The last time these teams faced off was in the 2019 semi-finals, where the Giants edged a thrilling encounter to send the Lions out of the postseason in straight sets.

Some big decisions need to be made at the selection table for both teams this week; the Lions are waiting on fitness tests for both Hugh McCluggage and Mitch Robinson, while the Giants need a replacement for Callan Ward.

Luckily for Greater Western Sydney, Tim Taranto is fit again after shoulder surgery earlier in the year and will add plenty of midfield grunt in Ward’s absence.

Lachie Neale is the runaway favourite for the 2020 Brownlow Medal, so we can expect the Brisbane star to cop a hard tag from Matt de Boer in one of several fascinating matchups at Giants Stadium this weekend.

Some players only find good form when they are paired with another, which we think has been the problem for Jacob Hopper in 2020. He has found it difficult to make an impact without Tim Taranto in the side this season, but the 2019 best-and-fairest winner is back this week and Hopper should benefit as a result.

We expect a hard tag for Lachie Neale from the first bounce, which leaves Jarryd Lyons as the next best ball-winning midfielder for Brisbane. Lyons was his side’s most prolific midfielder in last year’s semi-final loss, amassing 27 disposals in tough conditions. Lyons also had 27 touches a fortnight ago and 20 against the Cats last week, and we think he eclipses 25 this weekend.

There are not too many players in the competition that are as talented as Toby Greene. He kicked the first goal in the semi-final last year and should be sniffing around early again this week. Whether it’s a sharp crumb and snap from a stoppage or a strong mark and finish in the pocket, Greene will find a way to hit the scoreboard in the opening exchanges.

Nick Haynes and Phil Davis love to take territory and leave their opponents to run up the ground, but Eric Hipwood is a long kick at goal and can make an impact from beyond the 50-metre arc. Hipwood kicked three against the Giants in last year’s finals and will use his freak athleticism to boot a couple this weekend.

Although these teams boast plenty of attacking weapons, they also have well-drilled defensive units led by Phil Davis and Harris Andrews. We would be very surprised if this game turns into a shootout considering how good both sides are at shutting down their opposition’s avenues to goal.

As was the case in the 2019 semi-final, we think the Giants will be too strong for the Lions. The home-ground advantage tips the balance towards GWS, as does the massive inclusion of Tim Taranto.