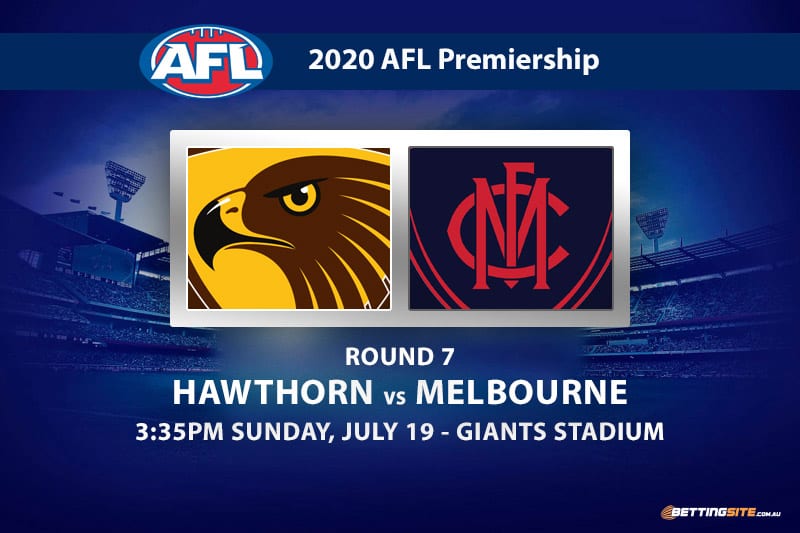 Two of Victoria’s proudest clubs will meet at Giants Stadium this Sunday afternoon when the Hawthorn Hawks and Melbourne Demons face off in round seven of the 2020 AFL Premiership.

While the Hawks have been the most successful side of the past 60 years with 13 premierships, the Demons are still searching for their first flag since 1964.

Things appeared to be looking up for Melbourne when it reached the preliminary finals in 2018, but it’s been all downhill since then.

The Dees sit 15th on the ladder with just two wins and the Hawks are 13th with a poor percentage, so both clubs need to turn it around quick-smart if they want to stay relevant in 2020.

There are key forwards missing on either side this week, as Jonathon Patton pulled his hamstring in the loss to the Giants and Tom McDonald is still recovering from an eye-poke.

Whichever team loses on Sunday could drop as low as 17th on the AFL ladder, so there is plenty riding on this one.

Isaac Smith is averaging 20 disposals per game while creating plenty of damage with his raw speed and penetrating kicking. The Hawthorn wingman’s ability to run out the entire match means he finds plenty of opportunities to win the footy. The Demons recruited Ed Langdon and Adam Tomlinson for jobs like this, but Smith is more experienced and will be hard to stop on the day.

Some players lift whenever they face certain opposition, and we think James Harmes loves to go up against the Hawks. The talented midfieler had a blinder last time he played Hawthorn, finishing the game with 31 touches. Harmes needs to stand up this week and find more of the football if the Demons want to win this match.

With Luke Breust and Jon Patton sidelined for the Hawks, we are backing Chad Wingard to kick a couple of goals this week. Gold Coast’s Izak Rankine had six shots on goal in his debut match against the Demons while playing a similar role to Wingard. If a first-gamer can have such a big impact against the Melbourne defence, Wingard should be even better.

Coming back into the side last week for his first game of 2020, Sam Weideman was good enough to kick a couple of crucial goals in the win over Gold Coast. Now that Tom McDonald has been ruled out, Weideman needs to step up and take charge of the forward 50. If he gets the service and clunks a few grabs, Weideman will be a good chance to kick multiples again this Sunday.

This clash presents a clear contrast of styles. While Alastair Clarkson’s Hawks are all about possession and tempo, Simon Goodwin’s Dees love to take the game on and get forward as quickly as possible. We expect Hawthorn to slow the game down at every opportunity, which could limit the scoring chances at either end.

Even though the Demons won last week and put up 80 points, we do not think their run-and-gun style will hold up against the Hawks. Hawthorn can control the ball across half-back and pick off kicks around the ground, which is how you can beat the impatient Dees.