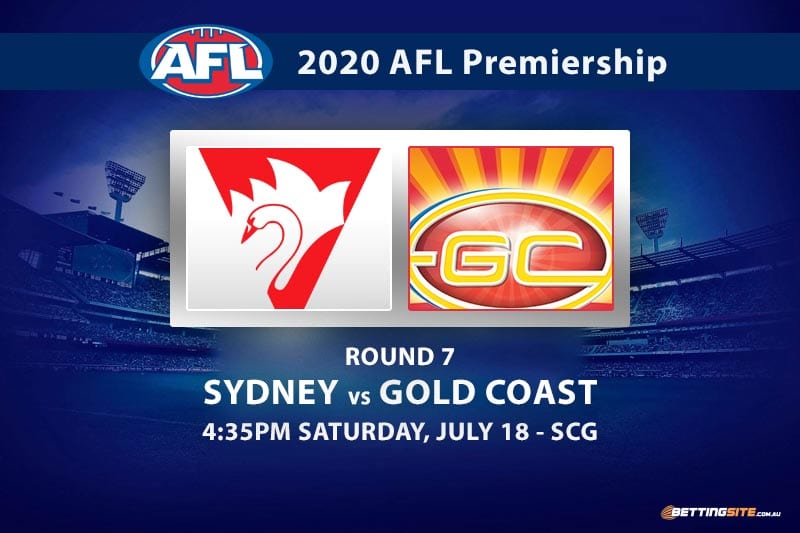 Can the Sydney Swans hold out against the young Gold Coast Suns without the star duo of Isaac Heeney and Josh Kennedy?

This will be the question at the tip of everyone’s tongues leading into this Saturday afternoon clash at the SCG in round seven of the 2020 AFL Premiership.

The Swans beat the Suns by 42 points when they met last year, but a lot has changed for both sides since then.

While Sydney has fallen down the ladder in 2020, Gold Coast is up and about thanks to some excellent work at the draft and the trade table.

Hugh Greenwood was a terrific find as an insider midfielder, as the former Crow leads the AFL in tackles and ranks among the top few in clearances.

We are still unsure about the potency of Sydney’s forward line, as Tom Papley has kicked nearly a third of the team’s total goals this season.

It will be interesting to see what John Longmire does at the selection table to cover for Heeney and Kennedy, who will be difficult to replace.

It seems every week we highlight a player that will stand up to fill in for an injured teammate, but Luke Parker would’ve been our first choice regardless. The Sydney co-captain has been at the top of his game for a few years now and sits 16th in the AFL for disposal average with 21 touches per game. Parker will bully some of the smaller Suns midfielders around the ground.

If the Suns want to win this match, they need to get more run from the outside of the contest, which is what Lachie Weller provides for his squad. Weller averaged 20 disposals across Gold Coast’s three wins this season, so we can expect him to find plenty of ball on the wing against the struggling Swans.

There is only one forward we trust for the Sydney Swans now that Isaac Heeney is out for the season, and that man is Tom Papley. The current Coleman Medal leader has slotted 13 goals in his six matches this season and the Suns back line has struggled with small forwards this season, so the numbers add up.

Izak Rankine’s much-hyped debut was worth the wait. The no.3 draft pick from 2018 bagged three majors from six shots on goal, including a couple of worldies. Rankine is pure electricity around the footy and we like the odds for the Rising Star candidate to kick multiples again this weekend.

The absence of Heeney and Kennedy will not help Sydney’s scoring issues, so we are banking on Gold Coast putting on the bulk of the points total this weekend. If the Suns kick a little truer than they did last week, they could be in for a big night.

The main issue for the Suns in 2020 has been stopping key position players when they get hot, but the Swans do not have any likely targets up forward that can tear the Suns apart. We think Rankine and Ben King make a great pair up forward and will kick a bag of goals between them in a big victory this Saturday.