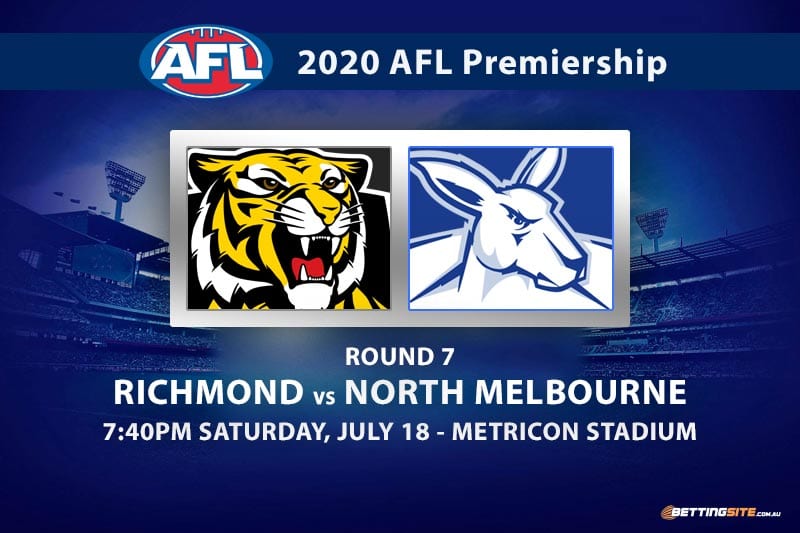 Crash-and-bash footy will be top of the agenda when the Richmond Tigers and North Melbourne Kangaroos do battle at Metricon Stadium this weekend.

The Roos have brought an extra dosage of aggression into every match this season, yet they have won only two games and sit 16th on the ladder.

The Tigers are still missing a slew of senior players, with Trent Cotchin out due to an ongoing hamstring issue and David Astbury battling knee trouble.

North will take the cautious approach with Ben Cunnington, whose sore back hasn’t allowed him to play freely all season, while jack Ziebell is all but certain to return.

Although the Kangaroos have lost their last four matches, they take a glimmer of hope into the weekend having won their last meeting with the Tigers.

We are expecting a tough midfield contest filled with big hits and tackles, forcing players to quickly dispose of the footy in tight congestion. Nick Vlastuin is one of the best intercept markers in the competition and should pick off plenty of North Melbourne kicks across half-back this weekend.

We predicted this would be a breakout season for Jy Simpkin, and now the young midfielder is ranked sixth in the league for total disposals and leads the Roos in several key statistics. Simpkin is ready to go against Dustin Martin in the midfield and should use his pace to break away and find 25 disposals.

It hasn’t been a perfect start to the season for the three-time Coleman Medal winner, but Jack Riewoldt is starting to find some form at last. He had three shots on goal in a low-scoring affair at the SCG last week and looked threatening. The North Melbourne defenders will have their hands full with Tom Lynch, so Riewoldt could get loose early and bag the opener.

Ben Brown is the first-choice forward option for the Kangaroos, but Cameron Zurhaar leads the club’s goalkicking this year. With eight majors since the restart, Zurhaar is far and way the most consistent threat inside 50 for North. We love his aggression and can see him scoring a couple of goals against the undermanned Tigers.

Damien Hardwick was assaulted in the press after Richmond and Sydney combined for a meagre 60 points in miserable conditions at the SCG last weekend. The Tigers coach could open up his defensive structures this week and allow for a more free-flowing contest, while the Roos must improve their finishing after squandering some easy chances in the loss to Essendon.

Sitting 16th on the ladder after losing four straight matches, we find it hard to choose the Roos here. Richmond has more weapons in the forward half and should make good use of them this weekend. The Tigers are still some way off peak form, so don’t expect a huge winning margin.