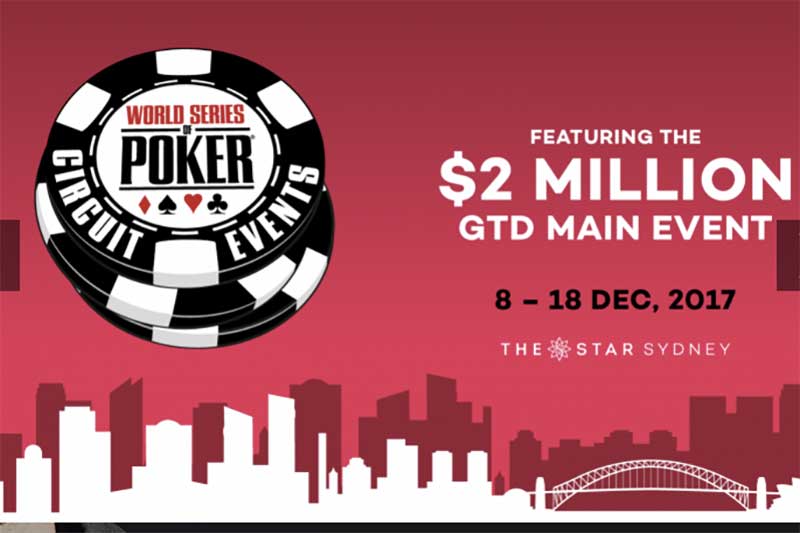 There is finally some good news for Australian poker players with the Star casino announcing the return of the World Series of Poker (WSOP) in Sydney, New South Wales.

With the impending prohibition of online poker, Australian players need some good news and here it is.

The 2017 WSOP Sydney circuit is back for the second year in a row and the event will take place at Sydney’s Star casino from November 28 until December 18.

Featuring 13 events across the 21 days – two more than last year’s event –, and 14 coveted WSOP Gold Circuit Rings to be won, the circuit stop offers a total minimum prize pool of $3.8 million across the series.

Other popular events include the $20,000 buy-in High Rollers Event and the $1100 Monster Stack Event.

The Main Event winner, as well as the overall Casino Champion, will be granted a seat at the 2018 WSOP Global Casino Championship, where an official WSOP gold bracelet and a guaranteed $US1 million prize pool are on offer.

The Casino Champion category is based on the player with the most points from the 11 official WSOP events on the schedule. These exclude Master and Ladies events.

The Main Event winner of the 2016 tournament, Joel Dodds, pocketed $360,364 in prize money and will be representing the Star casino at the 2017 Global Casino Championship in August.

He will be joined by the event’s 2016 Casino Champion, Chistine Hia, who earned the title by winning two separate events last year.

“Everyone in poker dreams of winning a World Series of Poker title so to do it twice was amazing,” she said.

“The great atmosphere and the fun locals in the Star Poker Room make it one of my favourite places to play.

“I am looking forward to heading back to Sydney to defend my two titles.”

World Series of Poker Director, Gregory Chochon, is hoping for the same turnout as last year.

“The World Series of Poker is the biggest and the best tournament series in the world, and we couldn’t be happier to be bringing the Australian leg of the international circuit back to The Star for the second year running,” he said.

The WSOP Circuit launched in 2005 and first debuted in Sydney in 2016. The Australian stop was among 22 stops around the world including Canada, Georgia, Italy, the Czech Republic, and Morocco.

Australian poker players still have time to brush up on their skills online and prepare for the WSOP circuit as the Interactive Gambling Bill 2016 is yet to be approved by both Houses.

The House of Representatives rejected the secondary amendments proposed by the Senate after it was sent back for approval and proposed its own. These need to be approved by both houses which are not sitting again until August.

Meanwhile, Senator David Leyonhjelm, aka Australian poker players’ knight in shining armour, successfully lobbied for a poker inquiry which may exempt one of Australia’s favourite pastimes from the bill.

Senator Leyonhjlem’s best bet to succeed is to prove poker is a game of skill and not a gambling game – India views poker and other card games this way while all other gambling is mostly illegal.

The bill sets out to prevent Aussie players from accessing sites offering poker, among other online casino games, but this hasn’t stopped one court from prosecuting an online poker operator based in Australia under the Interactive Gambling Act 2001.

The Act states it is illegal to operate an online gambling site based in Australia which serves Australians.