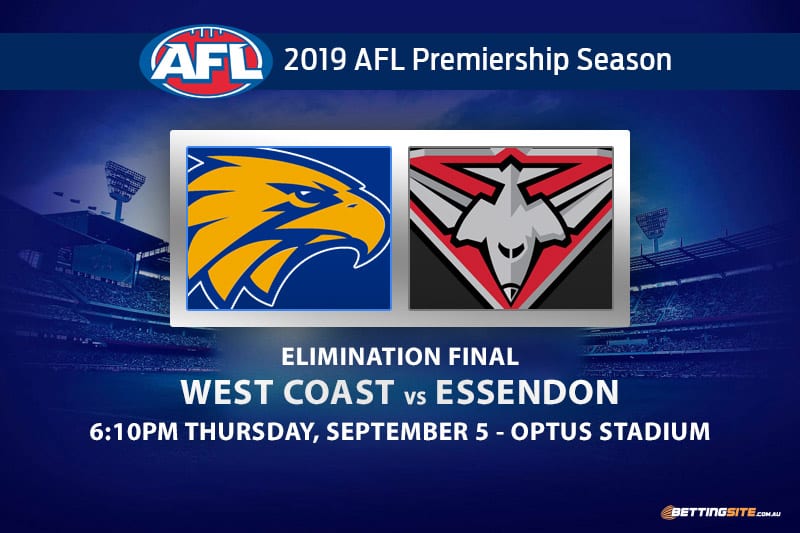 Kickstarting the 2019 AFL Finals Series will be the West Coast Eagles and the Essendon Bombers on Thursday evening in Perth.

Optus Stadium will be filled to the brim with devoted fans that want to see the Eagles make the AFL Grand Final for the second consecutive year.

This match will be the first elimination final of 2019, where the winner will proceed to the semi-final against the loser of Geelong and Collingwood.

When West Coast and Essendon played each other earlier in the season, it was the Eagles who won by just under five goals.

Adam Simpson’s men played very conservatively against the Hawks in round 23, which cost them the match and a spot in the top four.

Essendon played the Magpies and fought valiantly in the first quarter, kicking six goals to three to take a solid lead, but they fell apart due to injuries and a lack of endurance.

Travelling to Perth will be tougher for the Bombers players than a regular interstate trip, giving the Eagles a hefty advantage.

Dom Sheed to get 25 disposals @ $1.53 with Sportsbet
Very few players have made a name for themselves on the biggest stage like Sheed did last year. Even without kicking the amazing set shot in the grand final, the emerging midfielder’s final five matches of 2018 produced 147 disposals at an average of just under 30 per game. Sheed is a big-game player that will stand up for the Eagles in this clash.

Andrew McGrath to get 20 disposals @ $1.72 with Sportsbet
The 2017 AFL Rising Star has played the Eagles three times in his three seasons, with an average of 21 disposals per game. McGrath was very good in the Bombers’ loss to Collingwood in round 23 with 28 touches. If he can give the Dons a boost at half-back, he will be in the frame to get over 20 disposals.

Jack Darling to kick three goals
Rewarded with an All Australian blazer for his brilliant season, Darling has kicked 54 goals this year, with only 18 behinds. The Bombers will have to make the call on Michael Hurley this week, as he injured his shoulder in round 23. If Hurley gives less than 100% of what he would normally provide, you can expect Darling to expose the wounded defender.

Anthony McDonald-Tipungwuti to kick a goal
The electric small forward signed a contract extension during the week, lifting unwanted pressure off his shoulders. Although Tipungwuti kicks more goals when the Bombers win, he will have to perform well in this match, as his spark will give Essendon hope. Besides Jake Stringer and AMT, the Bombers do not have the most prolific forwards.

West Coast Eagles 40+ @ $2.50 with Bet365
Adam Simpson would have berated his players after they gave away a top four position to the Magpies, costing them two guaranteed home finals. Now the Eagles will need to take the long route to the big dance. A huge win over the Bombers will be a serious statement, sending a strong message to any team in their way.

If the Bombers play well and do everything right in this game, we still think the structure of Jeremy McGovern and Shannon Hurn will be too difficult to avoid. Brad Sheppard made the All Australian squad of 40 and is an underrated player. The Eagles have too many star defenders and the Bombers are light on forwards with Joe Daniher, Devon Smith and several others on the sidelines.