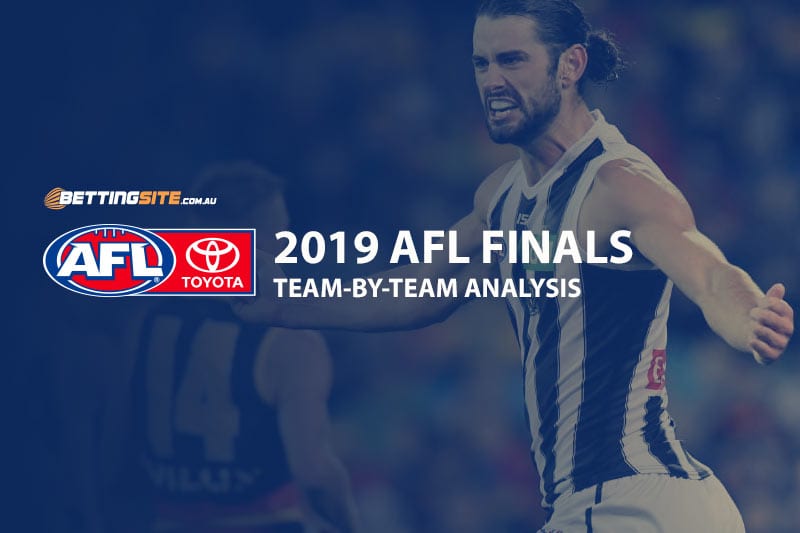 Eight teams have qualified for the 2019 AFL Finals Series after a challenging 23-round home and away season.

Three felines, two birds, a giant, a bulldog and a combat aircraft make up the field that will compete for the AFL Premiership from this point onward.

So which team is in the best position before any games are played and who is going to have the toughest run to the grand final?

Starting with the top positioned Geelong Cats and working our way down to the eighth positioned Bombers, here is a team by team analysis on what could happen in the 2019 AFL finals.

When you finish atop the AFL ladder and line up in a qualifying final, you are granted the home field advantage and the second chance.

The Cats will have to travel to their second home – the MCG – for this match, which has drawn the ire of fans and head coach Chris Scott.

Winning this match will automatically advance the Cats to the preliminary final, whilst a loss will see them face either West Coast or Essendon in a semi-final.

A win in the prelim will send Geelong to the GF, where they haven’t tasted glory since 2011.

The Lions bolted from the bottom half of the table in 2018 to secure second position this year, which will guarantee them two home finals regardless of the first result.

A win puts them into a preliminary final at the Gabba, while a loss will see them face either GWS or the Western Bulldogs at home.

The road to the AFL Grand Final always appears simpler if you finish inside the top four, which rings true for the Lions this year, who have barely dropped a game on their home deck.

They could easily find a way to get over the Tigers this week and would likely shoot into Premiership favouritism.

The Tigers are the current premiership favourites, as they have been able to defeat plenty of contenders while harbouring some big injuries.

Now that the Tigers are almost full strength, they will be ready to assault any side that appears before them.

Beating the Lions in round 23 serves as a good practice run for this massive final, although to trip to Brisbane makes it a tougher prospect for Richmond.

A prelim berth would put the Tigers on track to make their second GF appearance in three years.

With a handful of players ready to return to the field, the Magpies loom as a serious threat in September.

Jordan De Goey, Jaidyn Stephenson, Steele Sidebottom and possibly more stars could find their way back into the lineup for Friday’s clash at the ‘G.

Despite finishing fourth on the ladder, the Pies will play at their home ground due to concerns over the relative lack of seats available at GMHBA Stadium.

A win in the qualifying final will push the Magpies straight to the prelim, where they have enjoyed some memorable moments in recent years.

The Eagles gave up a top four finish to the Magpies when they lost to the Hawks at home in the final round of the regular season.

That means West Coast will have to take the longer route to the flag, playing four matches where only the first will be a home game.

If the travel does not get to the defending premiers and they can pinch a couple of upsets along the way, another GF appearance is not out of the question.

Star ruckman Nic Naitanui is a chance to return to the field this week, which could give the Eagles a huge boost at the right time of year.

Flashbacks to the 2016 preliminary final between these two clubs will be in the minds of every GWS player this week.

The eventual premiers were rampaging underdogs that day, but this time around the tables have turned as the Bulldogs are favourites away from home.

GWS has plenty of star power that could make a huge impact in the finals, but they will have to showcase it against the most in-form team in the competition.

A win in this match will see the Giants face the loser out of the Brisbane and Richmond game, which will be played on the loser’s home deck.

Of all the teams outside the top four, the Bulldogs look the most likely to win the 2019 AFL Premiership.

The Dogs are no strangers to this situation, having lifted the cup in 2016 after finishing the home-and-away season in seventh place.

With the momentum the Bulldogs have built, it would not be a surprise to see them knock off multiple teams away from home.

Another appearance in the GF is a very real possibility for Luke Beveridge and his Doggies.

As incredible as the upset would be, we do not give the Bombers a chance against the reigning premiers in Thursday’s elimination final at Optus Stadium.

Even if the Bombers can overcome the Eagles, they would then have to face the loser of Geelong and Collingwood, who are two of the strongest teams in the finals.

If they manage to beat either of those teams, they will have to face whoever won out of Brisbane and Richmond in the qualifying final, who would have had a week’s break.

Unfortunately for the Bombers, seesawing form does not get you anywhere in the finals.