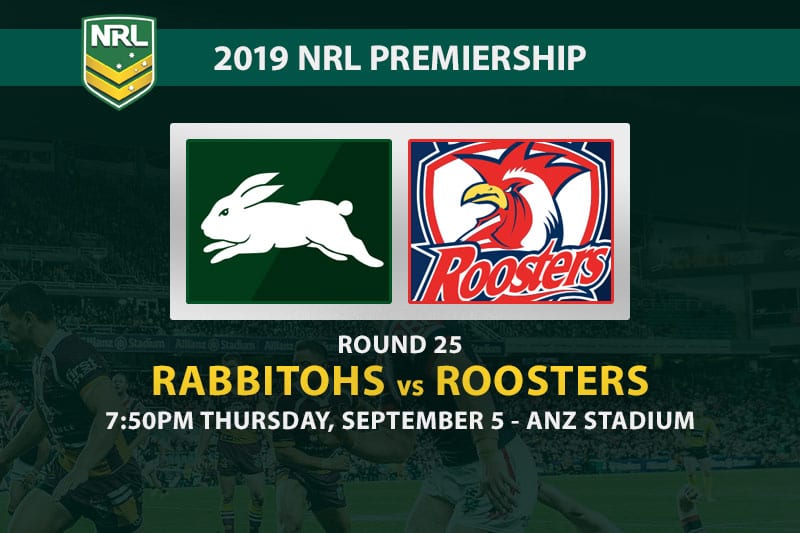 The 2019 NRL season has come full circle for two old rivals who met in the opening week.

The South Sydney Rabbitohs triumphed on that occasion at the SCG, kicking off a run of 10 wins in their first 11 games.

While their form has been streaky since mid-year, one more win – or even a respectable defeat – will guarantee the Bunnies a double chance in the finals.

If there were any doubts about the Sydney Roosters and the state of their premiership defence, seven consecutive wins have put them to bed.

The Chooks have blitzed the competition in the run home, although it is worth noting they have played only one team in the current top eight – Canberra Raiders – in that winning stretch.

It looks like Sydney will face either the Raiders or the Rabbitohs in the first week of the NRL finals, so Thursday’s clash at ANZ Stadium will serve as excellent preparation regardless of the outcome.

Kyle Turner injured his quad in the win over the NZ Warriors last week, so Tom Amone steps up to the interchange. There are no other changes to the matchday squad, with Kurt Dillon, Mawene Hiroti, Bayley Sironen and Connor Tracey filling out the reserves.

Out: Kyle Turner
In: Tom Amone

Siosiua Taukeiaho is sidelined with a rib injury, but the Roosters welcome back Boyd Cordner and Cooper Cronk just in time for finals. Angus Crichton moves to the bench to accommodate his skipper, while Drew Hutchison drops to the reserves.

Alex Johnston – Souths’ star winger announced his long-awaited return with a try against the Warriors. Johnston will be keen to impress and looks a good bet at $2 in Sportsbet’s anytime tryscorer market.

Latrell Mitchell – It is bloody tough to keep this man off the score sheet. With a league-high 18 tries for the year, Latrell is worth a go at $6 with Sportsbet to finish the game with two or more tries.

It might sound odd, but the Roosters could do with a loss. They have beaten up lower-half teams over the past two months and need a proper workout on the eve of the finals. Souths look dangerous with Johnston back on the wing and might just do the double over their arch-nemeses.