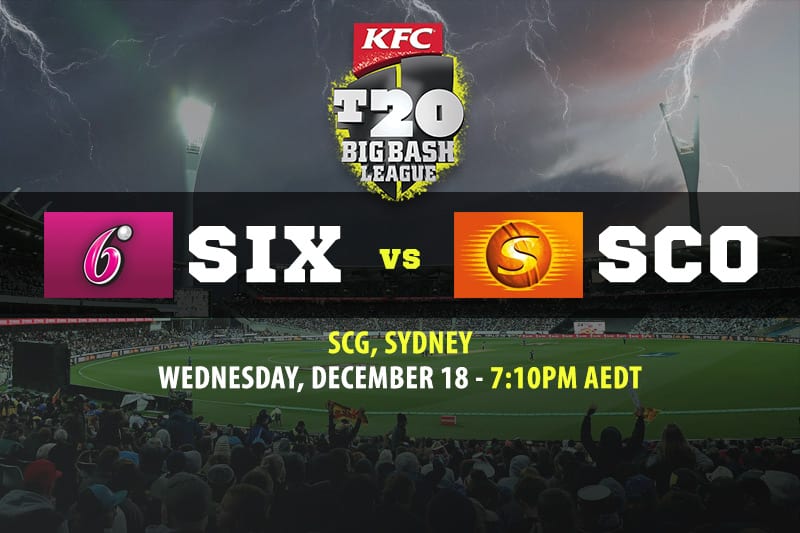 Tuesday’s Big Bash League clash at the Sydney Cricket Ground could prove telling for two teams that are tipped to finish in the bottom half of the table.

The Sydney Sixers are paying $9 to win the BBL title at Sportsbet.com.au, which puts them behind every other side except the Sydney Thunder ($10) in the outright market.

While the Sixers squad looks good on paper, the star trio of Josh Hazlewood, Nathan Lyon and Steve Smith will only have limited opportunities to don the pink this season. That may also be the case for long-serving seamer Sean Abbott, who was recently called up for Australia’s ODI tour of India in January.

The Sixers are likely to lose English imports Tom Curran and James Vince to international duty as well, so they will want to get the most out of them while they are here.

The Perth Scorchers have started the majority of their BBL campaigns among the title favourites, but this year is different. The three-time champions are pegged at $7 in the Big Bash outright odds, with the Brisbane Heat ($4.50), Melbourne Stars ($5), Melbourne Renegades ($6) and Hobart Hurricanes ($6.50) all better backed.

After so many years of dominance, the Scorchers must now navigate a tricky transitional phase. They finished dead last in BBL8 and will head into the 2019-20 campaign with a new-look squad.

Perth will start the season without star seamers Jason Behrendorff and Andrew Tye, who are both injured. Later on they will have to deal with absence of Ashton Agar and Ashton Turner, both of whom are set to tour India next month.

Daniel Hughes – $3.75 at Sportsbet
Hughes has been Mr Consistency for the Sixers, putting up over 200 runs in each of the past three seasons. He is far from the quickest scorer in the side, but his regular 40s and 50s make him a solid option for top scorer most weeks.

Cameron Bancroft – $4.50 at Sportsbet
It is hard to say where Bancroft will fit in the Perth batting order, but it might not matter much. The West Australian batsman was impressive on his return from suspension last summer and will want to catch the national selectors’ attention.

Sean Abbott – $3.75 at Bet365
At this level, Abbott is about as reliable as any quick bowler in the country. While he is not the most economical seamer going around, his aggressive approach and canny change-ups deliver wickets on a regular basis.

Matthew Kelly – $5.50 at Sportsbet
Perth’s injury issues will give Kelly a much-deserved starting spot in BBL9. He was terrific value in his seven games last term, taking 11 wickets at 14.7 while doing an excellent job in the death overs.

The Scorchers have changed a lot since last season and might take some time to hit their stride, but they still look a more dangerous unit than the Sixers. Back Perth’s top-end talent to shine through at the SCG.