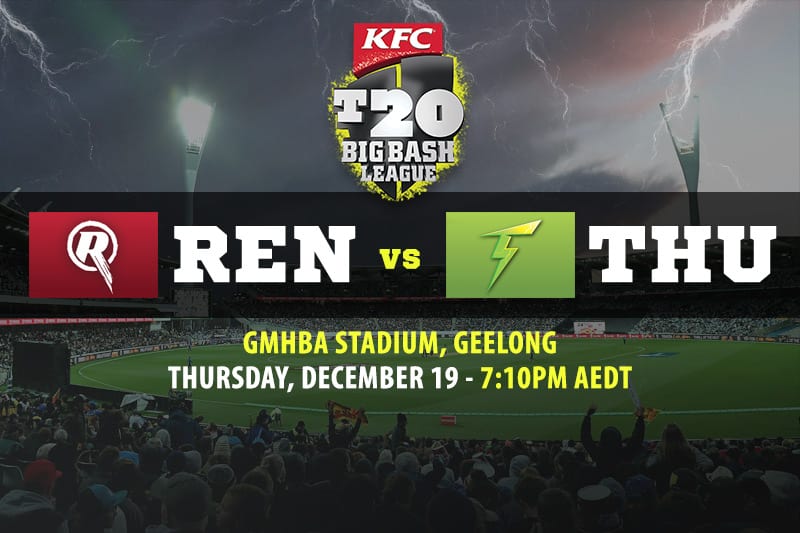 Fresh off a surprise victory over the Brisbane Heat, the Sydney Thunder will tackle the Melbourne Renegades at GMHBA Stadium in the T20 Big Bash League on Thursday night.

The Thunder started the season at the longest price in the BBL title odds, but a captain’s knock from Callum Ferguson and some tidy bowling saw them knock off the preseason favourites at the Gabba.

The Renegades have added some big names since winning their maiden BBL title last season. One new arrival that catches the eye is Shaun Marsh, who will partner Aaron Finch in what is shaping as the most dangerous opening duo in the competition.

The Gades have the edge on the Thunder in recent times, winning each of their last five clashes by healthy margins. The reigning champs will need to be on their toes in this match, however, as the Thunder could surprise us again.

Sam Harper @ $7 with Sportsbet
All the money for this market surrounds Aaron Finch and Shaun Marsh, but there’s a young keeper-batsman that will make plenty of runs for the Renegades. Sam Harper came alive in the second half of BBL8 and will want to keep the momentum going with a solid start to the new season.

Callum Ferguson @ $4.50 with Sportsbet
The Thunder skipper was brilliant in the first match of BBL9, making a game-high 73no off 44 balls. Not only did Ferguson bat well, his work as captain was very sound. We see Usman Khawaja and Alex Hales hitting violently early and Ferguson cleaning up and making the largest score.

Kane Richardson @ $4 with Bet365
Kane Richardson topped the BBL bowling charts last season with 24 wickets – six more than any other bowler – at an average of 17.7 and a world-class strike rate of 13.7. The South Australian seamer is now a wily veteran that knows how to bowl a wide variety, which is crucial in the short format.

Chris Green @ $5 with Sportsbet
One of the underrated performers on Tuesday was Chris Green, who made 25 runs and took two crucial wickets. Green does not turn the ball much, but his accurate spin is enough to force a mistake in this quick 20-over format. Green will need to target the middle order because Finch and Marsh are good when facing spin.

It would be a massive upset if the Sydney Thunder won back-to-back road trips against two of the Big Bash’s strongest franchises. The Gades look every bit as powerful as last season and will be hard to beat down in Geelong.