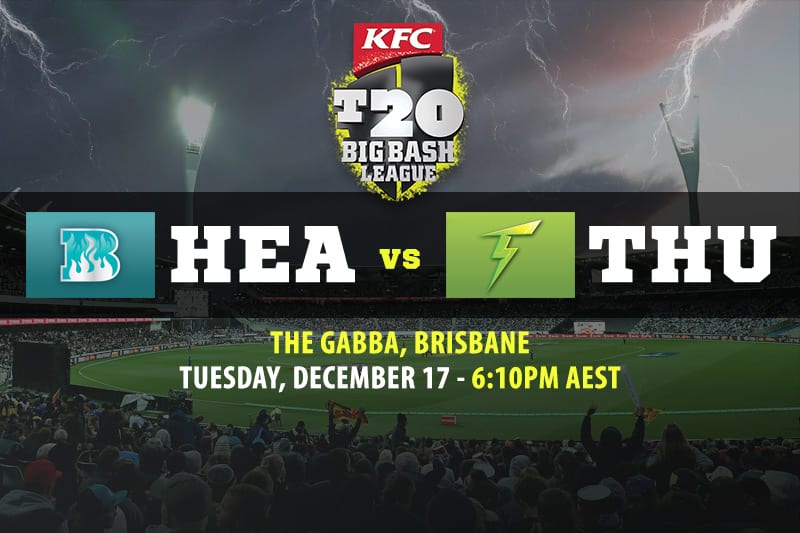 The Brisbane Heat will host the Sydney Thunder in the opening match of the 2019-20 Big Bash League season.

That aren’t many games on the schedule that look as good as this year’s opener, which will see Big Bash legends like Chris Lynn, Usman Khawaja and Ben Laughlin all take to the field.

Taking you back to the eighth BBL season, this matchup was declared a draw due to a light tower failure. Here’s hoping we avoid a repeat and the drama stays on the field this time.

After a rollercoaster of events in the last couple of years, including a fight with Ben Stokes and a recreational drug ban, Alex Hales will look to rebuild his cricket profile for the Sydney Thunder.

Our weekday evenings will have purpose again now that the BBL will return to Australian television. Here are our tips for the opening night.

Max Bryant @ $4.50 with Sportsbet
One man that quietly had a great debut season in BBL8 was Max Bryant, who made 335 runs in his 14 matches. With an impressive strike rate of 150.22, Bryant is a proven heavy hitter at the age of 20. Chris Lynn will lead the way for the Heat, but Bryant has made great preparations for this season and will be very hard to knock off.

Usman Khawaja @ $3.75 with Sportsbet
One of two things can happen in this match: either Usman Khawaja will prove the Australian selectors wrong and make a big score, or he will crack under the pressure as the most experienced batsman for Sydney. We think the former is more likely, as Khawaja is a certified star at BBL level. Usman carried the Thunder to their only Big Bash title a few years ago and consistently looks a class above in domestic T20 cricket.

Zahir Khan for two or more wickets @ $2.55 with BetEasy
The young wrist-spinner from Afghanistan will make his BBL debut for the Brisbane Heat this Tuesday, and you should see the way he turns the ball. Zahir Khan has taken 51 wickets in 40 T20 matches and made his Test debut last month against the West Indies. Still an unknown to many in Australia, Zahir will exploit that element of surprise to take a couple of wickets in this match.

Daniel Sams for two or more wickets @ $2.35 with BetEasy
A pure workhorse on the field, Daniel Sams can cause plenty of damage with bat and ball alike. The allrounder has made a name for himself as a quick bowler who hits the deck hard, but it will be his placement that could catch a few edges in this game. The Heat are filled with big hitters who take on anyone and everyone, which will see Sams collect a few wickets in this match.

The Brisbane Heat have been labelled as one of the best teams in the competition by online bookmakers, who have them sitting as championship favourites at $5 with BetEasy.com.au. Given they have one of the best batsmen in the league in Chris Lynn, and a very balanced bowling line-up, it is safer to take the favourites on the opening night. Look out for the international players for the Heat, as Tom Banton and Zahir Khan could be the difference by the end of the night.