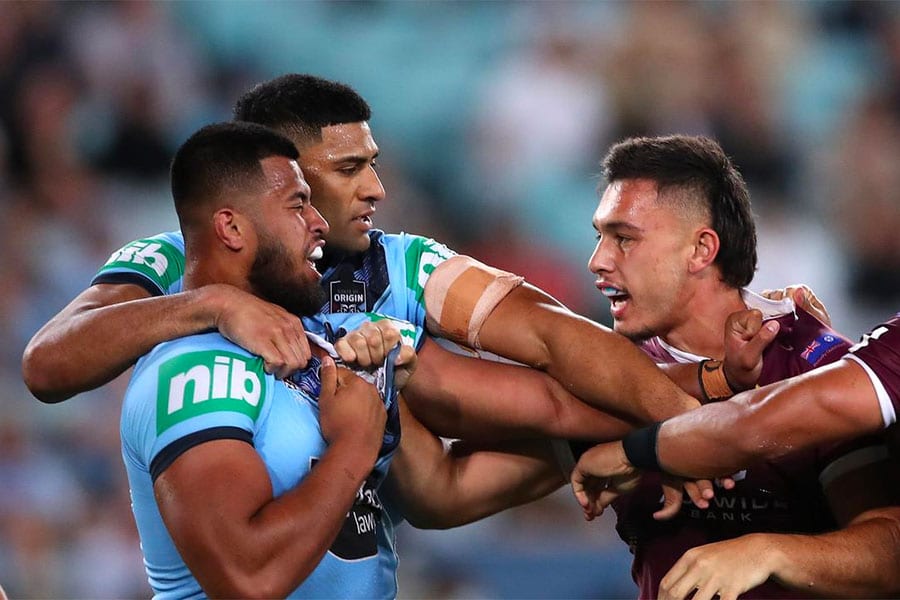 Game two of the 2020 State of Origin series proved once again the level of talent New South Wales has in comparison to Queensland.

It also proved that if the Blues had got anywhere near their ceiling as a football team so far, this series would already have been decided.

Queensland were unable to turn the game into a dogfight and just didn’t have the horses to cope with a blue onslaught.

A 34-10 demolition job was as impressive of a comeback as Brad Fittler could have hoped for after giving away game one in Adelaide on a platter.

Nathan Cleary finished with Man of the Match honours and can now tell everyone at last that he has a key attacking stat in Origin footy.

His long kicking was masterful, and his running game made the Blues an even stiffer opposition than they appeared to be pre-series.

The inclusion of Cody Walker also proved the right reign to pull, as the South Sydney star scored a try and had a hand in several others.

Cleary and Walker as a combination had the Blues humming and gave Queensland headaches all night.

Our $41 outsider for Man of the Match, Daniel Saifiti, put together another strong performance along with Payne Haas up front, and it provided a scary look to the future.

Saifiti is only 24 and Haas is 20. They could dominate for years to come.

We also loved the changes Freddy made to the bench, and they did an incredible job.

Dale Finucane and Isaah Yeo were superb, and Nathan Brown produced one of the game’s signature moments when he sent Jake Friend flying through the Homebush air on his first carry.

The Blues had shortened to $1.30 to win the game just before kickoff, and they are now $1.50 to win the decider at Suncorp Stadium.

To give you an indication of the ‘Lang Park factor’, Queensland suffered their fourth-worst loss in Origin history but come into the decider at the $2.58 price.

They blew out to $3.60 in the lead up to game two, so they’ve shaved more than a dollar off their odds purely by returning to the Sunshine State.

The other factor that swings the pendulum is the Blues have only won two deciders in Brisbane in their history.

In 1994, arguably the greatest Blues side ever dominated Mal Meninga’s last game, spearheaded by their GOAT, Laurie Daley.

In 2005, it was Andrew Johns who orchestrated a thumping win for NSW.

The fact it took legendary performances from the Blues’ two greatest players to get the chocolates in a decider north of the border should tell you everything you need to know about the task they face in winning their third straight series.

Just what Queensland do in the space of a few short days to heal the wounds of that loss is anyone’s guess.

They have the best coach available in Wayne Bennett, who can mentally get the players to believe, and it certainly doesn’t hurt to have Meninga in their corner too.

It’s almost been forgotten that they did lead 4-0 early in Sydney, but by the end of the game, they were begging for the full-time siren.

They don’t have the depth to make wholesale changes and will have to stick reasonably solid by necessity, but the biggest trump card they can pull is to have Cameron Munster available for more than two minutes.

He will race the clock to overcome concussion protocol, but he did pass the HIA on the night and so has every chance to prove his fitness.

The big gamble Queensland can take is finding a spot for Harry Grant to make his Origin debut.

New South Wales have Damien Cook setting the tone for a lot of their attacking play through the middle, so should Queensland fight fire with fire?

The compressed defence of the Blues has meant the Maroons have looked stronger on the edges with Kurt Capewell and Dane Gagai, but would Grant’s inclusion for Friend stretch the defence in a way which could open up more space for the likes of Josh Papalii to dominate up front?

Grant’s speed could be the antidote for Cook and James Tedesco, and if there is one coach who has the you-know-what to do it, it’s Bennett.

We felt most punters would be conservative with the NSW 1-12 margin, but well done if you went big and trusted the 13+ at around $2.50 with online bookmakers.

Cleary was one of the favourites to be Man of the Match, even though he was under intense pressure to keep his spot after game one.

Well done if you kept the faith, but we feel a lot of punters would have lost out in this market.