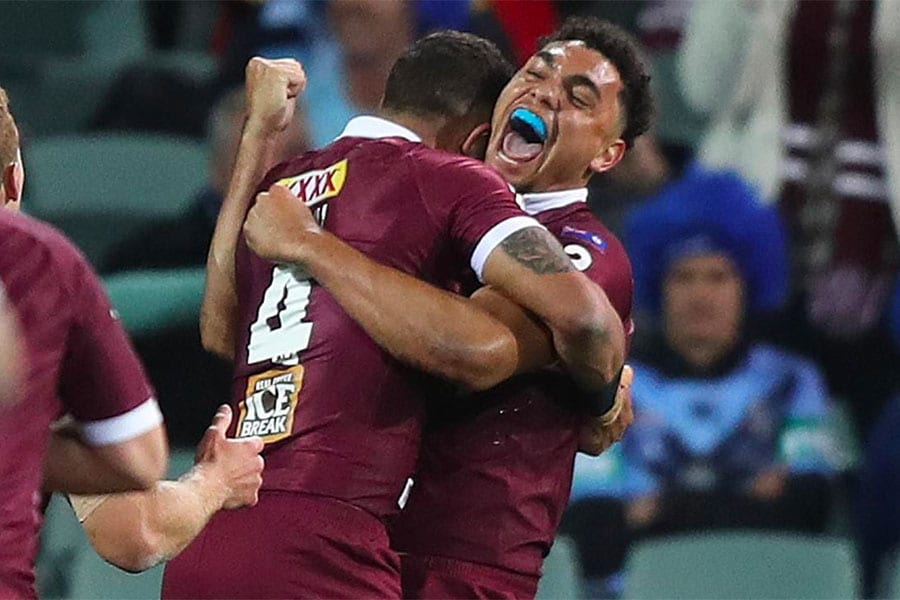 The first game of the 2020 State of Origin series showed us once again why you should never give up on a side in a two-horse race.

Queensland may have been $3.30 at online bookmakers just to get the win, but the more you look at the result, the more likely that scenario appears to live in your head.

Every man and his dog wanted to point out how weak the outside backs were for Queensland, but New South Wales took a big risk by playing non-specialist centres and it backfired.

Blues back to the drawing board?

Clint Gutherson might have thrown the final pass on two Josh Addo-Carr tries, but he was found wanting in defence on several occasions – and in Origin football, there is a much greater emphasis on what you do without the ball.

Jack Wighton is the current Dally M Medallist, but he put forward perhaps the worst game of his career.

His 170+ metres look nice on paper, but he also only had a 47% tackle efficiency marking up against Dane Gagai.

Gagai is a sensational performer at this level, but it is almost impossible to defend as poorly as that on any given night.

What makes it even more baffling is that Wighton is one of the best defenders in the NRL, so was it just a bad night at the office or was it a case of being outmatched having to defend one spot further out in the defensive line?

Brad Fittler and company have some huge decisions to make with the make-up of their back line, and it could mean both players are dropped, but a reshuffle could also see Wighton move to five-eighth.

The lack of cohesion between Luke Keary and Nathan Cleary has thrown a huge cat amongst the pigeons.

Keary had some nice moments running down the left edge and some nice yardage kicks, but the same can’t be said about his halves parter.

Cleary, for the second time in 10 days, put up a poor performance in a big game.

When the team were crying out for direction in the second half, he couldn’t provide it, instead sitting back and watching teammates throw errant passes which led to big results for Queensland.

It’s moments like the Daniel Tupou offload leading up to Cameron Munster’s try that cannot happen and reflect badly on the halfback.

If Cleary was in control of the team, there would have been no panic and Tupou wouldn’t have tried something so crazy.

The Penrith playmaker needs to take more control and bark orders at teammates, demand the football and get his team to the spots he needs to get them before putting in a good kick.

He has now played six Origin games and is yet to produce a performance expected of a representative half, so is he the one to make way?

On a positive note for the Blues, Junior Paulo and Daniel Saifiti were outstanding up front but got little help from the rest of the pack.

Losing Cameron Murray early didn’t help, but Jake Trbojevic, Tyson Frizell, Payne Haas and co. were anaemic for most of the night thanks to the good work done by the likes of Josh Papalii, Christian Welch and Tino Fa’asuameauli.

And what about the Queenslanders?

A 10-0 deficit is by no means a death sentence in modern rugby league, but it’s never wise to be chasing points in State Of Origin.

They were told in the lead up they were the worst team in 40 years of Queensland Origin history, but Wayne Bennett must have forgot to tell them.

Oh, to be a fly on the wall for that halftime speech. Or perhaps it was more what he didn’t say?

The Maroons were far too lateral in the first half and didn’t trouble the New South Wales defence when they were inside their attacking 20, which made it easy for the Blues to hold out.

The tide began to turn when the Maroons held NSW out just before the break to avoid going down by three tries, which would have just about iced the game.

Having Bennett at the helm was always going to be reason enough not to count them out, but his adjustments at the break were fantastic.

The message coming out of the game about what inspired the comeback was a simple one: “Earn the right in the middle and put some pressure on them before we spread the ball wide”.

Immediately, you could see the defensive intensity lift. Then followed field position, and then came the points.

Within 15 minutes, the $1.33 favourites pre-game were on the ropes and didn’t look like answering the call.

The game followed almost the exact same script as game one of the 2019 series – so if you backed the Blues to win it all this year, there’s plenty of reason to hold on to your betting slip.

The race is never over in Origin; it only takes a fresh turn.

Pre-game, we liked AJ Brimson as a first tryscorer option. Now while he didn’t salute with the game’s maiden four-pointer, he did get the first for the Maroons.

Dane Gagai might not have scored his customary Origin try, but many would have had Xavier Coates in their State of Origin same-game multis.

Queensland wingers almost always score on debut, so of course Big X got the job done.

Seeing Daly Cherry-Evans win man of the match despite how poor he was in the first half has thrown the MOTM betting into chaos.

He did a good job in the second half but was close to Queensland’s worst in the first 40, so trying to predict winners in that market based on that form guide from the selectors is going to be tricky for game two.

We liked Junior Paulo for the Blues and he was perhaps their best player, so he might be another good shout for game two.

The Blues coaching staff will no doubt have seen the difference on tape when he was off the field as opposed to when he was on, which means to save the series they’ll need to find a way to increase his minutes.