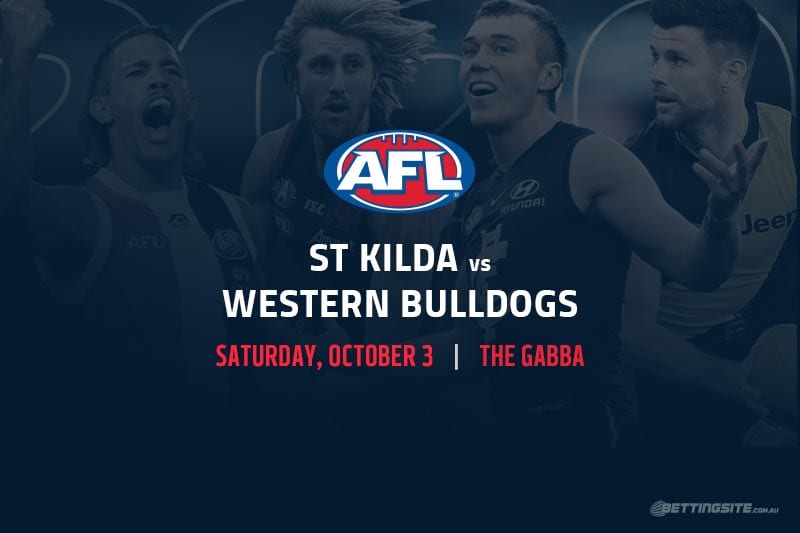 There are no second chances in Saturday’s AFL 2020 elimination final between the St Kilda Saints and Western Bulldogs at the Gabba.

Since the Saints finished sixth on the ladder and would normally play at their home ground, they were given the choice of stadium and selected the Gabba.

These sides have only met twice in the finals since their 1992 semi-final clash, with the Saints winning the 2009 and 2010 preliminary finals.

St Kilda utility Josh Battle will miss this match after sitting out training during the week with a foot complaint, but Zak Jones is primed to return.

Aaron Naughton, Mitch Wallis and Laitham Vandermeer are all pushing for selection, with the former two all but certain starters despite copping injuries in round 18.

Bulldogs key forward Josh Bruce will have another crack at beating his old teammates this Saturday, as their meeting earlier this season went in favour of the Saints by 39 points.

No player averages more disposals in this matchup than Josh Dunkley, who has tallied 33, 38 and his 2020 season-high 28 disposals in his last three games against St Kilda. Two of Dunkley’s last three matches this season were 20-disposal efforts, and we believe he will surpass that amount again this weekend.

Not many players have kicked goals consistently in this matchup in recent years, but Jack Billings is the outlier. Having kicked a goal in each of his last four clashes with the Doggies, including five in his last two, Billings poses a real threat when the Saints break forward. He was on fire earlier in the season when he faced the Bulldogs, collecting 24 touches and kicking three majors.

The combination of Max King and Tim Membrey forward with one of the resting ruckmen has worked well this year, and the Western Bulldogs may struggle with their height. Alex Keath and Zaine Cordy are strong in the contest but cannot match the reach of King, Marshall and Ryder in the air, and that will put St Kilda’s dangerous crumbing forwards in play from the first contest.