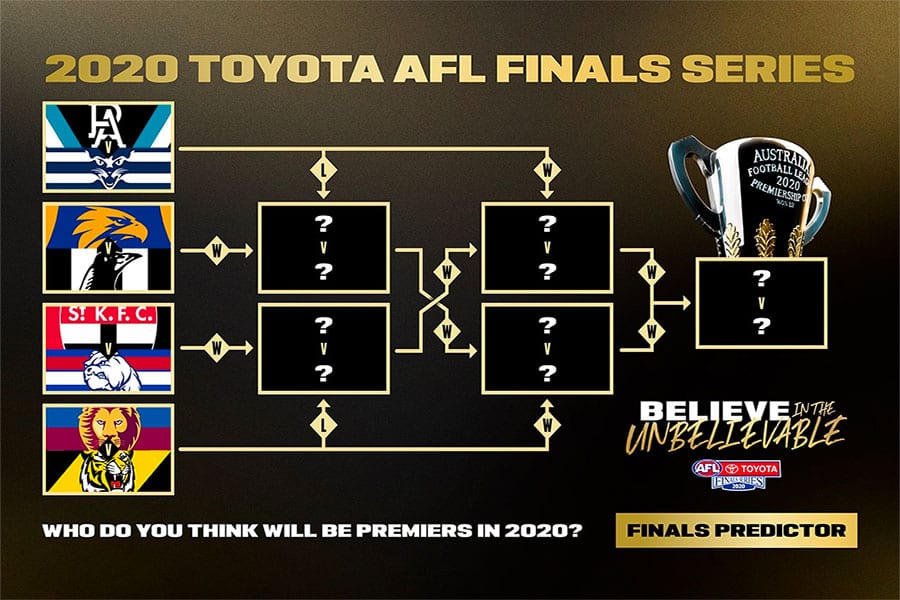 Countless hours have been poured into the 2020 AFL Premiership season to ensure the clubs, players and fans still experience footy this year, and now it’s time for the finals to begin.

The eight remaining clubs will battle through the usual format; the top four teams will stay alive even if they lose in week one, but there’s no second chances for the bottom four teams.

Three of the four home teams will play at their actual home stadium in front of their die-hard fans, which hasn’t been the case for a majority of the year.

All four matches promise to be enthralling contests, so let’s take a deeper look into what could be the difference this weekend.

What better way to start off the 2020 AFL finals series than with arguably the biggest match of the lot?

Ken Hinkley and the Port Adelaide Power will host Chris Scott and the Geelong Cats at Adelaide Oval in front of 25,000 avid local fans.

There has been a swing in the market for this match, as the Power started as outsiders but have swiftly moved to $1.73 favouritism, pushing the Cats out to $2.15.

Both sides will be at maximum strength with no significant injuries on their list. The Power welcome back Ryan Burton, Tom Clurey and Zak Butters, while the Cats bring in first-choice ruckman Rhys Stanley and tackling machine Tom Atkins.

The winner of this match will come down to how well both midfields move the ball, as Charlie Dixon and Tom Hawkins thrive in one-on-one situations.

Look out for Butters coming back in for the Power, as the second-year player cracked into the 40-man All Australian squad this season with his slick hands and smart ball-use going forward.

The Richmond Tigers have ruled Tom Lynch out for this contest, which is a massive blow for both their forward structure and goalkicking avenues.

Harris Andrews is still a chance to return for the Brisbane Lions, who will give their star backman until Friday to prove his fitness.

Dion Prestia and Jarrod Berry are all but certain starters, while the Lions must also make the call on whether Noah Answorth comes in to counter Richmond’s small forwards.

It has been over 10 years since the Lions last beat the Tigers in 2009, a game where only Daniel Rich, Jack Riewoldt and Shane Edwards participated for their current teams.

Trent Cotchin has played in 16 consecutive wins against Brisbane, while Dustin Martin is not far behind him with 15.

The Lions can win this match if they shut down Martin and keep the inside 50s to a minimum, but the Tigers’ brand has destroyed Brisbane in recent years and consistently stands up in finals.

There’s no next week for the loser of this contest, which might be the hardest to pick in a round full of strong matchups.

The St Kilda Saints elected to play this final at the Gabba, a right they earned by clinching sixth place on the ladder thanks to their strong percentage.

Aaron Naughton suffered a cheekbone injury against the Dockers in round 18, but a quick surgery has put him in frame to play for the Western Bulldogs this week.

Mitch Wallis is also in line to start after hurting his shoulder against Freo, so the Doggies’ forward line could be close to full strength.

Midfield bull Zak Jones will come back for the Saints, with many pundits tipping Dean Kent to make way.

Both teams love to play fast footy, but it could be Tim English’s ruck duel with Rowan Marshall and Paddy Ryder that proves decisive.

The clearances will be extremely important this Saturday, as the winner in that statistic should score more easily due to both clubs’ forward structure.

These two proud clubs will meet in the postseason for the first time since their epic battle in the 2018 AFL Grand Final, but this time they will be playing for their lives in the opening week.

A handful of players are fighting for a spot in the West Coast Eagles‘ 22, including Jeremy McGovern, Josh Kennedy, Luke Shuey, Mark Hutchins, Jamie Cripps, Jack Redden and Lewis Jetta.

The Collingwood Magpies don’t have quite the same level of resources at their disposal, as Steele Sidebottom was denied permission to play after returning to Victoria and Jeremy Howe suffered another setback with his injured knee.

While the other three matches are likely to revolve around the midfield battle, the forwards could decide this game as Collingwood’s Jordan De Goey and Jaidyn Stephenson take on West Coast’s Josh Kennedy and Jack Darling.

The Magpies and Eagles have put together some modern classics in recent years, and they could provide another belter in their first-ever elimination final clash.