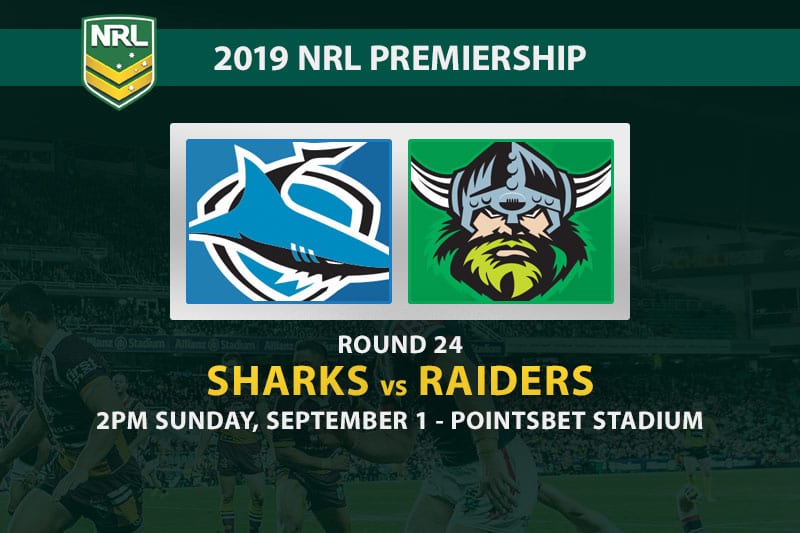 The final Cronulla Sharks home game of the 2019 NRL season might just be the biggest of the lot.

If the Parramatta Eels beat the Brisbane Broncos on Friday, the Sharks can make sure of finals footy with a win on Sunday.

But if Cronulla come up short and other results go against them, they will have no room for error when they play the Wests Tigers in the last round.

The Canberra Raiders have no such concerns, although they are yet to lock down a spot in the top four and a double chance in the finals.

Two wins will guarantee third place for Ricky Stuart and his charges, but even one loss in the run home could see them slip into the bottom half of the eight.

Sosaia Feki (groin) and Jack Williams (ankle) are both out injured, which sees Sione Katoa recalled on the wing and Jayson Bukuya named on the bench. Matt Moylan is listed among the reserves.

Joey Leilua’s suspension sees Nick Cotric move to the centres, with Bailey Simonsson returning to the starting 13 on the wing. Siliva Havili completes the bench.

Out: Joseph Leilua
In: Siliva Havili

Bronson Xerri – The Sharks had six different tryscorers in last week’s win over the NZ Warriors, but Xerri is the one who keeps delivering. Back him for the first try at $11 with Sportsbet.

Jarrod Croker – The Canberra captain is best known for his prolific goalkicking, but five tries in three weeks suggest Sportsbet’s $2.50 quote for anytime tryscorer is well worth a pop.

This is a big game for both sides. The Raiders have had a tough run home and would love another win over quality opposition, but the Sharks are bound to lift in front of a packed house for Paul Gallen’s final home game.