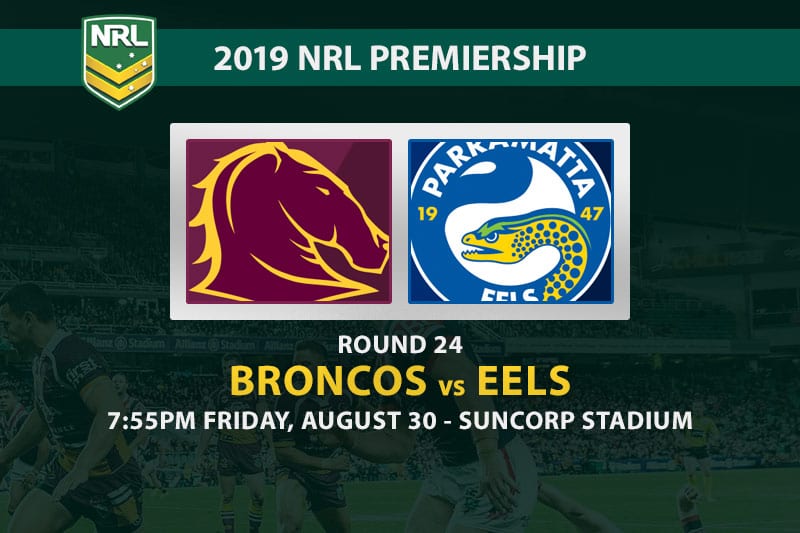 There is no shortage of motivation on either side of Friday night’s NRL clash at Suncorp Stadium.

If the Brisbane Broncos win, they could have a finals slot sorted by Sunday evening if other results fall their way.

If they lose, however, Anthony Seibold’s men could slip out of the top eight with only a week remaining in the home-and-away season.

The Parramatta Eels are playing finals in 2019, but they need the two points to have any hope of sliding into the top four.

Last week’s loss to Canterbury means the Eels could slip as low as seventh, so Brad Arthur will want to see a big response in Brisbane.

There are no changes to the Broncos 17 that pushed South Sydney to the wire last week. Herbie Farnworth, Rhys Kennedy, Izaia Perese and Fanitesi Siu are named in the reserves, while Jake Turpin is still out suspended.

Blake Ferguson returns on the wing after six weeks out with a knee injury, which sees Brad Takairangi move to the bench. Marata Niukore starts at lock with Nathan Brown suspended, while Peni Terepo fills out the interchange and Tepai Moeroa drops out.

Kotoni Staggs – With Brisbane’s third try against the Bunnies, Staggs extended his scoring streak to seven tries in six games. Sportsbet’s $2.30 quote for anytime tryscorer is well worth a go.

Maika Sivo – He spurned several good chances in the loss to the Bulldogs, but Sivo remains a huge threat on the Parra flank. Check out the $5 at Sportsbet for two or more tries.

The Broncos have improved in the back half of the year, but their poise under serious pressure is still a concern. And while the Eels are a point-scoring force at home, they are far less prolific away from Bankwest Stadium. Get on Parra to cover the line in a game that produces no more than 40 points.