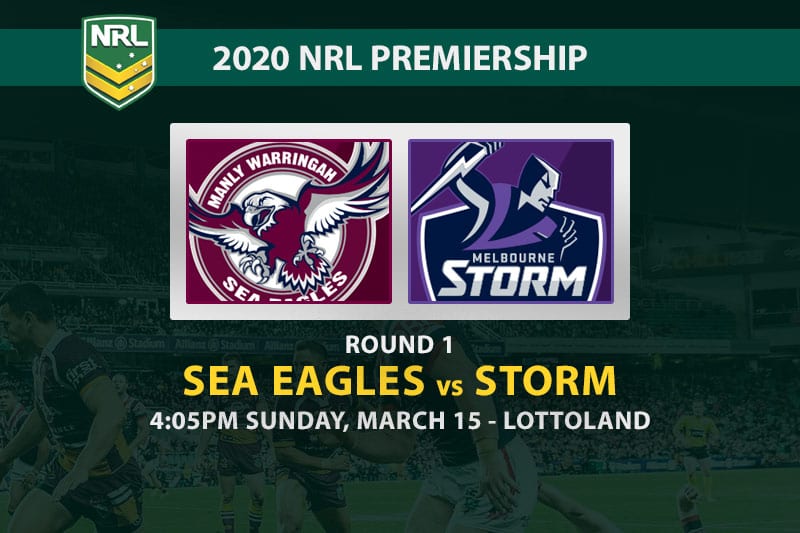 One of the big matchups of NRL Round 1 sees the Melbourne Storm head up to Lottoland to take on the Manly Sea Eagles on Sunday afternoon.

The Sea Eagles improved out of sight last year, rising from 17th in 2018 to finish sixth on the ladder in Des Hasler’s first season at the helm. There is plenty of optimism around Brookvale in 2020, as reflected in Manly’s $13 price in the outright market at BetOnline.

As ever, the Storm will start the campaign among the hot tips for the title. Most online bookmakers have them around $6.50 in the NRL Premiership betting, behind only the Sydney Roosters.

Manly were one of the few teams to get the better of Melbourne during the home-and-away season in 2019, so we can expect a cracking contest when the two clubs renew hostilities this weekend.

Jake and Tom Trbojevic are both named to start despite lingering concerns over their fitness, while Addin Fonua-Blake is ready to go after shoulder surgery in the offseason. Danny Levi makes his Manly debut at hooker.

Nelson Asofa-Solomona is listed among the reserves, but he could slide into the matchday 13 if he proves his fitness between now and Sunday. If that occurs, Tui Kamikamica will most likely drop to the bench and push Max King out of the squad.

Since joining the Storm in 2017, Josh Addo-Carr has emerged as one of the very best wingers in all of rugby league footy. The 24-year-old NSW State of Origin rep is as quick as they come and hard to stop with the ball in his hands.

Melbourne Storm to win by 1-12 points

This is a tricky one to call. Manly are a very good team when the Turbo Twins are both on the park, but Melbourne have shown time and again that they can beat anyone, anywhere. Back the Storm to edge a tight one at Lottoland.