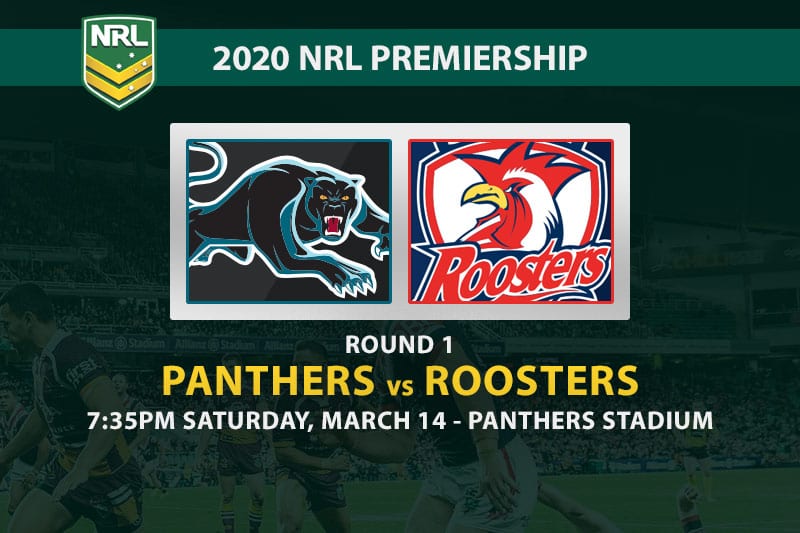 The Sydney Roosters kick off their NRL Premiership defence this Saturday with a trip to the outer west to face the Penrith Panthers.

While they have lost a couple of big names since their NRL Grand Final victory over the Canberra Raiders, the Chooks start the year as $4.25 outright favourites in the title betting at BetOnline.

The Penrith Panthers are well back in the pack at $21 for the flag, although more than a few pundits are tipping Ivan Cleary’s young side to push for a finals berth.

How will the Panther cubs fare against the reigning premiers?

Dylan Edwards is out with a busted ankle, so Caleb Aekins gets first crack at fullback. New recruit Kurt Capewell is sidelined with a quad problem, while James Fisher-Harris is named on the bench as he works back from a pectoral injury. Apisai Koroisau starts at hooker and Zane Tetevano makes his Panthers debut against his former side.

Kyle Flanagan takes over the no.7 jersey from the retired Cooper Cronk, while Angus Crichton steps into Latrell Mitchell’s old spot in the centres. Boyd Cordner missed the World Club Challenge last month and will sit out the opening week at least, with some sources suggesting the Sydney co-captain won’t return before Round 3.

James Tedesco finished the 2019 NRL season with 18 tries and a shedload of accolades, including the Dally M Medal. He is the most dangerous fullback in the league and could take on an even more prominent striking role now that Latrell Mitchell has flown the coop.

The Panthers come into the 2020 season with none of the hype that surrounded them last year, and maybe that is a good thing. It is hard to see them beating the reigning premiers without a full-strength side, but the home field advantage might keep the scoreline respectable.