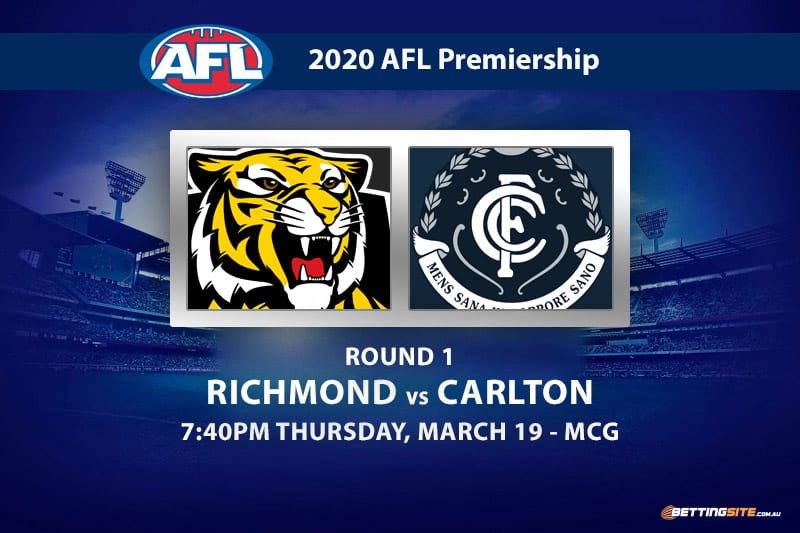 Despite all the drama, the Richmond Tigers and Carlton Blues will kick off the 2020 AFL Premiership season on Thursday night at the Melbourne Cricket Ground as scheduled.

In the last few seasons Richmond comfortably beat Carlton to open its account for the year, but the Blues are evolving into a better outfit under David Teague and look ready to take another step in 2020.

Dustin Martin and Patrick Cripps will go head-to-head in the midfield, but there will also be a handful of new Blues ready to make a statement, including the prodigiously talented Jack Martin.

With a shortened season and shortened match durations, both teams will be putting out their absolute best effort.

Putting the 2017 Brownlow Medal winner at full forward has worked wonders for Damian Hardwick. Dustin Martin is tough as nails and breaks tackles with ease, making him a great option in the forward half. Martin has previously kicked four goals against the Blues and we think he will hit the scoreboard frequently in this match.

Sam Walsh to have 25+ disposals

There is no chance that Sam Walsh suffers from the dreaded second-year blues, as he is too consistent and competitive to fall under the pressure. Walsh only dropped under 25 disposals nine times in his first AFL season, a terrific achievement. The future face of Carlton will be hard to stop now that he has completed another AFL preseason.

We are not sure how much the shortened game times will affect the scoring, but we do know Richmond and Carlton are hard to penetrate on defence. Even without the now-retired Alex Rance, the Tigers have a powerful back six, while the Blues are developing quickly. This will be the measuring stick for the season.

While the Tigers will start off strong as the 2020 AFL Premiership favourites, the Blues will bring a very competitive style that will be hard to stop. With the match duration shortened, we think Carlton will hold on long enough to cover the 20-point line.