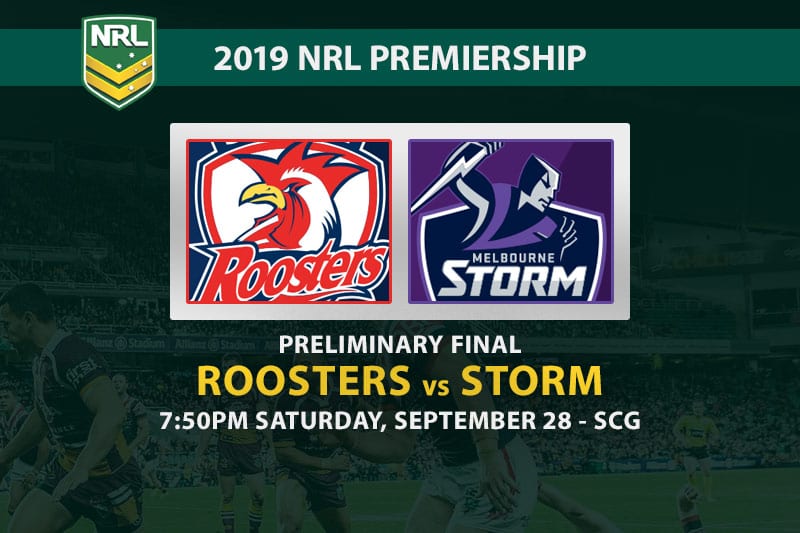 Only one of the top two teams in this year’s home-and-away season will advance to the 2019 NRL Grand Final.

The Sydney Roosters finished the regular fixtures with a loss to the Rabbitohs, but they bounced back with a comprehensive 30-6 win over their arch-rivals in the first week of finals.

Now the Chooks take on the Melbourne Storm, who have had to go the long way round after a narrow loss to the Canberra Raiders two weekends ago.

That disappointment was short-lived, as the minor premiers thumped the Parramatta Eels 32-0 in the semi-finals to reach the penultimate weekend for the sixth time in eight years.

Storm fans will want to see more of that ruthless streak when the men in purple take to the SCG this Saturday.

Jared Waerea-Hargreaves is out suspended again, so Siosiua Taukeiaho comes into the starting side and Lindsay Collins joins the interchange. Co-captain Jake Friend is listed in the reserves alongside Ryan Hall, Drew Hutchison and Sitili Tupouniua.

Out: Jared Waerea-Hargreaves
In: Lindsay Collins

Storm boss Craig Bellamy has stuck with the same 17 that dismantled Parra last time out. Curtis Scott is named to start at centre, with Will Chambers to feature from the bench. Sandor Earl, Marion Seve, Joe Stimson and Tino Faasuamaleaui are the reserves.

Latrell Mitchell – Along with his haul of 19 tries for the year, Mitchell has found the line in eight consecutive games at the SCG. The $2.40 at Ladbrokes for anytime tryscorer is excellent value.

Josh Addo-Carr – After a costly error against the Raiders, JAC responded with a first-half brace to drown the Eels. Bet365 is offering tasty odds of $2.40 for the NSW winger to score a try at any time.

Roosters vs Storm stats and trends

Whatever happens, this will be a terrific game of footy. The Storm were the best team all the way through the home-and-away season, but their premiership credentials took a huge hit in the first week of finals. The Roosters have more of an x-factor, especially in the back half, and the SCG has served them well this season. Get on the Tricolours to edge it in a close one.