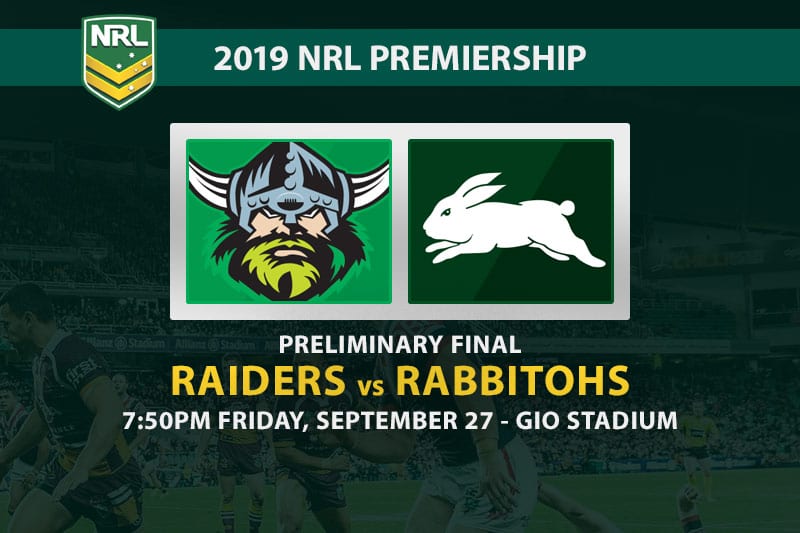 The first of this year’s NRL Grand Final combatants will be decided when the Canberra Raiders host the South Sydney Rabbitohs on Friday night.

The week off has worked wonders for the Raiders, who would have been a man or two down if they had played in the semi-finals.

Instead, Ricky Stuart’s men head into the penultimate week of the season refreshed as Canberra look to reach the big dance for the first time in the NRL era.

Souths took a much tougher route to the prelims after losing to the Sydney Roosters in the first week of finals.

Last Friday’s shootout with the Manly Sea Eagles could have gone either way, but it was the Bunnies who prevailed with late tries from John Sutton and Cameron Murray.

Wayne Bennett will demand a much stronger display over 80 minutes when his Rabbitohs visit the Australian capital this week.

Joey Leilua was a big doubt after his late benching for the Storm clash, but the star centre is named to start against the Bunnies. Nick Cotric is also cleared to play, so Bailey Simonsson joins Emre Guler, Corey Horsburgh and Dunamis Lui on the pine.

The Souths selectors have stuck with the same 17 that saw off the Sea Eagles in the semis. The only doubt is James Roberts, who is battling a thumb injury. If the former Brisbane Broncos centre cannot play, Corey Allan might come in as part of a back-half shuffle.

Nick Cotric – While he has not been the most prolific of scorers this season, Cotric has notched tries in three of his last four games against the Bunnies. Take the $2.25 at Bet365 for anytime tryscorer.

Cody Walker – With 16 tries for the year, Walker has been a tour-de-force at five-eighth. The NSW rep has three tries in his last four games against the Raiders, so Sportsbet’s $4.33 anytime tryscorer odds are the way to go.

Raiders vs Rabbitohs stats and trends

While the Bunnies should take some confidence from their win in the capital back in May, these Canberra boys mean business. Souths will try to open things up and make the game as ballistic as possible, but the hosts are battle-ready after a challenging run home and should seal the deal in a tight one.