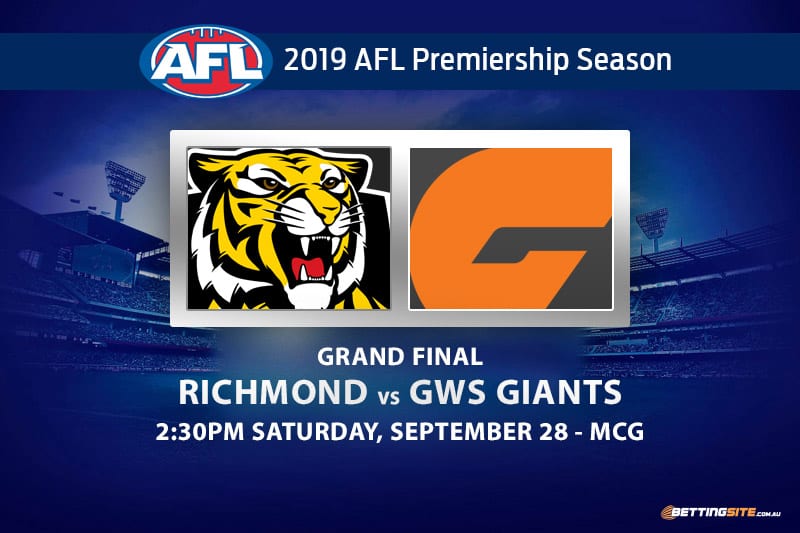 It all comes down to one last game in 2019, the AFL Grand Final, where the Tigers and Giants will battle for the premiership cup.

Greater Western Sydney will appear in the big dance for the first time, while Richmond will try to win its second flag in three years.

This year’s preliminary finals were filled with classic highlights and individual brilliance, topped off by complete team-efforts.

Damien Hardwick’s Tigers were scared early against the Cats and went into half-time trailing by over 20 points, but a massive momentum swing in the second half saw the yellow and black kick eight goals to secure a place in the title match.

Collingwood and GWS fought out one of the best preliminary finals in years, perhaps to the detriment of the Giants.

Leon Cameron’s men were cruising after a big third quarter, but the Magpies kicked four consecutive fourth-quarter goals to set up a nail-biting final five minutes.

Stephen Coniglio has been ruled out of this match, but Toby Greene and Lachie Whitfield are set to return for the Giants.

The Tigers will have to make a huge selection to cover for the injured Jack Graham, with Marlion Pickett a chance to debut in the biggest game of his life.

Despite being priced around $3.20 for every final thus far and winning, the Giants look set to start as $3.20 outsiders again this week.

Will the bookies regret giving the interstate team long odds, or will the Tigers get the job done at the ‘G?

Trent Cotchin to get 20 disposals @ $1.88 with BetEasy
The Richmond captain has found it difficult to play consistent footy in 2019 after multiple injuries. As the most experienced leader on the list, Cotchin will not take a backwards step once the match begins. He hasn’t been finding the ball much in the finals so far, but he will have a great granny for the club he bleeds for.

Toby Greene to get 30 disposals @ $2.30 with BetEasy
Greene sat out the bruising preliminary final due to a suspension, so the rested star is primed for a big day at the ‘G. Last time Greene faced the Tigers he found the footy 34 times and also kicked two goals. The GWS superstar has been one of the best players across the finals series and when he goes into the guts, he is hard to stop.

Tom Lynch to kick three goals @ $1.83 with Bet365
Lynch’s first-ever final at the MCG ended with a five-goal haul, and we think he will have a similar impact again this week. The former Gold Coast co-captain is one of the best forwards in the competition and will be very difficult to stop on a lead. His simple set-shot routine works more often than not. A sore Phil Davis will have his hands full.

Jeremy Cameron to kick three goals @ $2 with Bet365
The key forwards at both ends are the players to keep an eye on. Cameron enjoys facing the Tigers and enjoys the big stage even more. He kicked three goals last week and has 17 from the past four weeks. In his two matches against Richmond this year, the 26-year-old forward kicked seven and three goals. The absence of Alex Rance is still a major issue for the Tigers and will prove costly if Cameron fires up.

The weather forecast does not tilt the balance one way or the other, but the pressure of Grand Final Day will leave players with unclear thoughts. More players till try to take the game on and take more risks, leading to a high-scoring match. Both teams counterattack extremely well and are short on fit defenders. With very talented forwards at both ends of the ground, this match will go over the 153-point mark and could even push up to 170.

Both teams have a very good chance to win the 2019 AFL Grand Final, but the Tigers are the more convincing choice at this point in time. If the Giants were able to field Stephen Coniglio, they would have been our choice. The Richmond forward combination of Tom Lynch and Jack Riewoldt will be hard to handle.