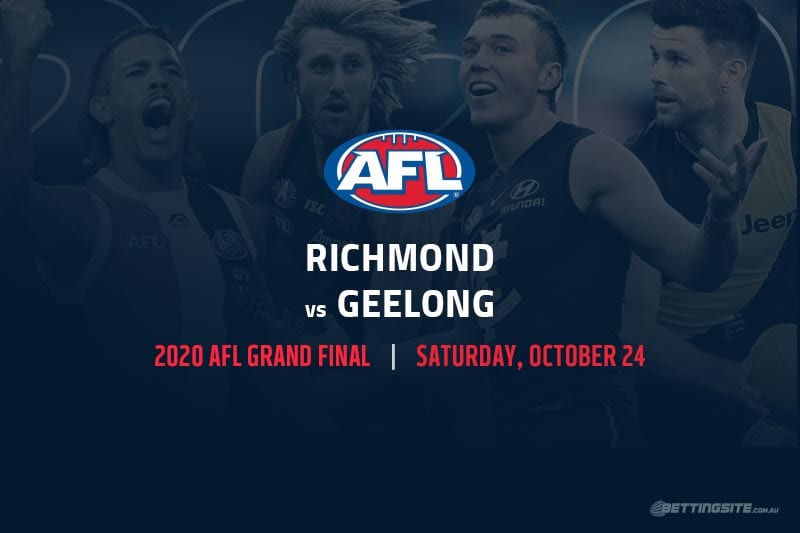 The 2020 AFL Premiership will be decided this Saturday when the Richmond Tigers and Geelong Cats do battle under lights at the Gabba.

This season will rank as one of the most tumultuous and interrupted in the game’s history, yet we have ourselves a massive contest this weekend in the first AFL Grand Final to be staged outside Victoria.

It wouldn’t be Grand Final week without a big question mark hanging over one of the players, and this year the spotlight shines on Tom Hawkins.

The 2020 Coleman Medallist was forced into isolation on Tuesday due to a sore throat, but the Geelong spearhead has tested negative to COVID-19 and is expected to line up this Saturday.

That means there should be no changes made to either side, which would leave two-time Richmond premiership player Josh Caddy sidelined.

This will be the first AFL Grand Final played by the teams who finished third and fourth on the ladder, while it’s also the first time two qualifying final losers will meet in the big dance.

Look no further than Bachar Houli’s two prior AFL Grand Final performances. It can be argued that Houli deserved the Norm Smith Medal for his 25-disposal effort against Adelaide in 2017, while he backed it up in 2019 with 26 touches against the GWS Giants. The dynamic backman was quiet against the Cats in round 17, but his run and carry could be crucial to Richmond’s chances.

Ruckmen who push forward and kick goals are valuable assets, and Rhys Stanley is one of the best in the league when it comes to hitting the scoreboard. Stanley averages a goal per game in 2020, thanks in no small part to his stellar running capacity. Given he has slotted a goal in three of his last four games against the Tigers, we like the odds about Stanley here.

We haven’t seen an AFL Grand Final this unpredictable in years. Richmond beat the Cats earlier in the season but lost to the Lions in week one of the finals, and Geelong smashed that Brisbane team by 40 points last week. Gary Rohan was a late out when these teams met in round 17 this season, but he has since fired up and found form at the right time. The accurate field kicking of Mitch Duncan and Sam Menegola will be the difference, as Hawkins is hard to stop when the service is there.