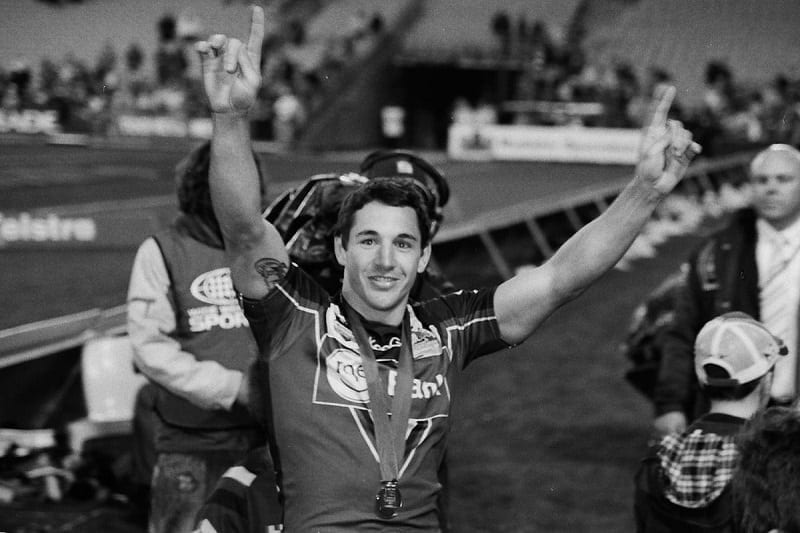 Unfortunately, the Clive Churchill Medal doesn’t always go to the best player on the field in the NRL Grand Final.

There is a feeling around NRL circles that this award has become more of a narrative-based affair and isn’t judged on merit.

There are many examples where the best player on the night did get the award, but in recent years there have been some questionable calls.

In 2016, Andrew Fifita was comfortably the best Sharks player but had a red line through his name because of his public support for a convicted one-punch killer.

The NRL didn’t want to deal with any potential backlash, so Fifita was snubbed in favour of Luke Lewis.

In 2015, the story centred around how Johnathan Thurston’s legacy would change if he won a title with the North Queensland Cowboys.

Lo and behold, JT won the Clive Churchill Medal despite James Tamou being the best player on the field for the Cowboys.

Thurston had the great moment of kicking the winning field goal, but the rest of his play on the night was well below his best.

Jack Wighton caused controversy last year when he won the award in a losing side, and there was confusion at the last moment as to whether Jared Waerea-Hargreaves was the actual winner.

As such, the narratives need to be considered when laying down some hard earned on the 2020 Clive Churchill Medal betting market.

Cameron Smith and Nathan Cleary are the obvious favourites at $4.50 apiece, and even Ray Charles could see why.

Smith is playing perhaps his last game in what has been the greatest rugby league career in 112 years.

A third premiership, fifth NRL Grand Final win and the Clive would be the last milestone to tick off. Shockingly, it is the only award missing from his resume.

If the Melbourne Storm win, someone will have to play the game of their lives to take it off him. Sporting narratives do not get any better than that, it would be mind-blowing if he doesn’t win the Man of the Match award.

SEE ALSO: HOW TO BET ON NRL GRAND FINAL DAY

Cleary is playing his 100th game in a Grand Final at the tender age of 22 and has already had media articles written about whether he will one day become an Immortal.

One way you get to that status is by winning awards like this in premiership teams, and there is no denying he is the darling of the NRL media.

Cleary has had a fantastic season and has finally started fulfilling his obvious talent, so a Penrith Panthers win would almost be a coronation ceremony for their star halfback.

In the event either Smith or Cleary misses out, there is a ton of value to be had.

Jarome Luai was a whopping $51 in the Clive Churchill Medal betting before the finals kicked off, but since then he has come into $21 to win the award.

He has been remarkable in both of Penrith’s finals victories so far in 2020. If someone is destined to have a starring role outside of Cleary, it’s his halves partner.

Api Koroisau at $17 is also one to look out for. He has been the best signing of 2020 and helped Penrith take the next step as a club, and his name jumped off the page when we started looking at potential Clive Churchill Medal winners a few months ago.

Koroisau has already won a premiership with South Sydney and was one of their best on that night, so the big stage holds no concerns for the Fijian international.

James Fisher-Harris is fresh off making the Dally M Team of the Year, and the $26 for him to win the Clive is sensational value.

His bruising carries and defence stick out like a sore thumb, so he will get the voters’ attention.

But real long shot for Penrith is James Tamou at $67. Anyone who watched the 2015 decider will know he was objectively the Cowboys’ best player in that game, and he has been a bastion of strength for the Chocolate Soldiers.

NRL Grand Final battles are won in the hearts of tough men up front, and Tamou has the ability to lay the foundation for a Panthers win. At that price, how could you not have $5 on him?

Looking at some Storm outsiders is also a lot of fun.

Cameron Munster in his last NRL Grand Final appearance was sin-binned twice, so he will no doubt have that in the back of his mind and want to make up for it.

He isn’t the best value at $10, but he is a more than realistic chance of taking the medal off Smith.

Ryan Papenhuyzen comes in at the same price, while Jahrome Hughes is $15 to win the medal on the back of his stellar performance against Canberra.

Both are capable as well, but the experience of playing in his fourth NRL Grand Final makes Munster a safer pick.

Much like Tamou, Jesse Bromwich can inspire his team to a premiership win by blazing a trail through the middle of the field.

When Melbourne win big games, they usually do so by nullifying the middle forwards on the opposition team.

On this alone, Bromwich should be in the conversation at $26 should Melbourne win the game.