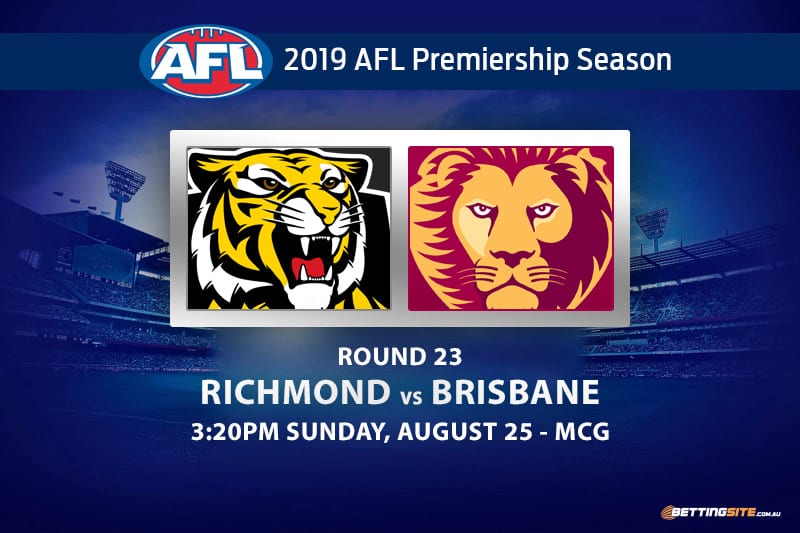 The 2019 AFL regular season will come to an end after round 23, but it will go out with a bang when the Tigers and Lions go head-to-head this Sunday.

This top four clash at the MCG will determine the pairings in the first week of finals, with Richmond a chance to finish as high as first and as low as fifth.

Brisbane has already solidified a position in the top four and could possibly finish top two, even if they lose this week.

The last five matches between these two feline clubs have all been won by the Tigers, including a 93-point demolition in 2018.

Chris Fagan has turned the Lions around very quickly and they are now a chance to finish top of the ladder.

The Richmond defence has stood tall without Alex Rance all season, but can they handle the ballistic and unpredictable Lions this Sunday at the G?

Damien Hardwick’s Tigers have won their last eight matches – a winning streak that ranks second only to Brisbane, which has won its last nine encounters.

Regardless of the result, this match could end up being a 2019 AFL Grand Final preview that we will look back on in a month’s time.

Dion Prestia to get 30 disposals @ $1.72 with Sportsbet
Prestia has enjoyed a very productive season for the Tigers, finding the footy at an alarming rate. In the past five weeks, he has only got less than 30 once, which was his 29-disposal effort in the wet last week. Prestia is a very clean and clever midfielder that will find plenty of the ball this Sunday.

Jarryd Lyons to get 30 disposals @ $2.25 with Sportsbet
Tough midfielders that use the ball well are very hard to come by, but Lyons was an absolute bargain buy among Gold Coast’s 2018 delistings. The former Adelaide prospect has been in very good form over the past fortnight and will continue to prosper in the middle for Brisbane. He has averaged 31 disposals across his last two games.

Richmond vs Brisbane Round 23 goalscorer betting

Dustin Martin to kick two goals @ $3.10 with Sportsbet
Last time these teams met at the MCG, Martin only touched the ball 17 times but wound up with six goals. If the Lions do not target Dusty on defence, he will hit the scoreboard again. The Richmond superstar has booted multiples in five games this year.

Eric Hipwood to kick two goals @ $2.37 with Sportsbet
Most key forwards have struggled to kick bags of goals against Richmond’s revamped defence this season, but Hipwood is different. The 21-year-old Queenslander is tall but fast, which makes him hard to match up. If the Lions move the ball quickly enough, Hipwood can lead up and take plenty of marks inside 50.

Richmond vs Brisbane Round 23 margin odds

Richmond by 1-39 points @ $2.10 with Sportsbet
Although the average winning margin across the last five matches is 59 points, this week’s game will be a different kind of contest. The Lions are top of the ladder because they are a very capable team, which is why the Tigers will struggle to put them away.

Richmond vs Brisbane Round 23 predictions

The Richmond Tigers have stormed into AFL Premiership favouritism after beating the Eagles last week. With their speed across the ground and their strong backline, the Tigers will find a way to beat the Lions at the MCG.