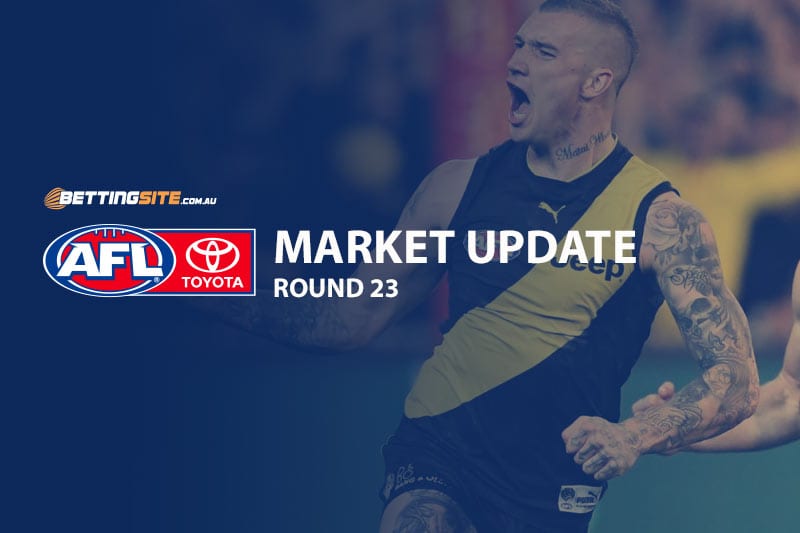 The final round of the 2019 AFL season will take place this weekend, where teams will fight to solidify their positions in the top eight.

After the penultimate round exceeded monumental expectations, this week will provide some enormous season-defying encounters.

Many players will retire from AFL footy as 10 of the 18 teams bow out of the premiership race, meaning we can expect big crowds and plenty of spirit around the grounds.

Let’s see how the odds are shaping up at Sportsbet.com.au – one of Australia’s best AFL betting sites.

Collingwood made a huge impact in South Australia when it dealt the Crows their largest-ever defeat at Adelaide Oval. Priced at $2.90, the Bombers will enter the MCG as underdogs. The $1.40 Magpies need to win in order to keep their top four chances alive. See our Collingwood vs Essendon preview here.

Although both teams’ seasons are over, John Longmire has said the Swans are playing for pride. The Saints fell short last week to the valiant Blues and head to Sydney as $2.75 outsiders. Lance Franklin is a chance to play game 300 for the $1.43 Swans if he can overcome his ongoing niggles in time.

This inter-city clash between North Melbourne and Melbourne will start with the Roos as $1.25 favourites after their huge win over Port Adelaide. Melbourne disappointed again last week, losing to the Swans at the MCG. The Demons, who are guaranteed to finish second from bottom, sit at $3.85.

Geelong needs to win in order to lock in a top two position, but Carlton will not go down easily. Although the Blues are priced at $5, they are finishing the season with a flurry. Sitting comfortably at $1.16, the Cats will want to make a statement before entering the 2019 AFL finals.

The battle of the expansion teams will take place in the final round of 2019, although the gap between the two new clubs has become stark. Having lost their last 17 matches, the $10.50 Suns will have one last chance for a home win. The betting is completely one-sided towards GWS at $1.04.

This match will determine whether Hawthorn can make the top eight and how high the West Coast Eagles can fly before the finals commence. The Hawks are $4.05 outsiders in what could be the last match for many of their ageing stars, while the Eagles are paying $1.23 at home. See our West Coast vs Hawthorn preview here.

The Bulldogs have stormed into the top eight after winning their last two matches by a massive 104 and 61 points. Priced at $1.31, the Dogs will enjoy the atmosphere of their second home in Ballarat. The $3.35 Crows must win to have any chance of making the finals.

This week’s match of the round sees the Tigers and Lions square off at the MCG. Brisbane ($2.78) sits one game clear on top of the AFL ladder after a stunning win over Geelong, but Richmond ($1.43) could leapfrog three teams to finish in first place if things go just right this week.

Port Adelaide and Fremantle will meet for the second time this year in what could be both teams’ final game of the season. The Power are $1.35 favourites and need to win to have any chance of playing finals. Freo could ruin Port’s season if the $3.12 underdogs create an upset at Adelaide Oval.

Last week’s thrilling top-four clashes have had an immediate impact on the 2019 AFL Premiership odds. The Tigers ($3.50) have become the new outright favourites after knocking off the Eagles ($4.20) at the MCG. Brisbane ($5.50) creeps closer to the top after beating the Cats ($5) at the Gabba. Collingwood are still in the mix after defeating the Crows ($151) in Adelaide, moving up to $7.50. The Bulldogs were priced at $151 only a few weeks ago, but they have bolted into contention at $21 after big wins over Essendon ($51) and GWS ($26).