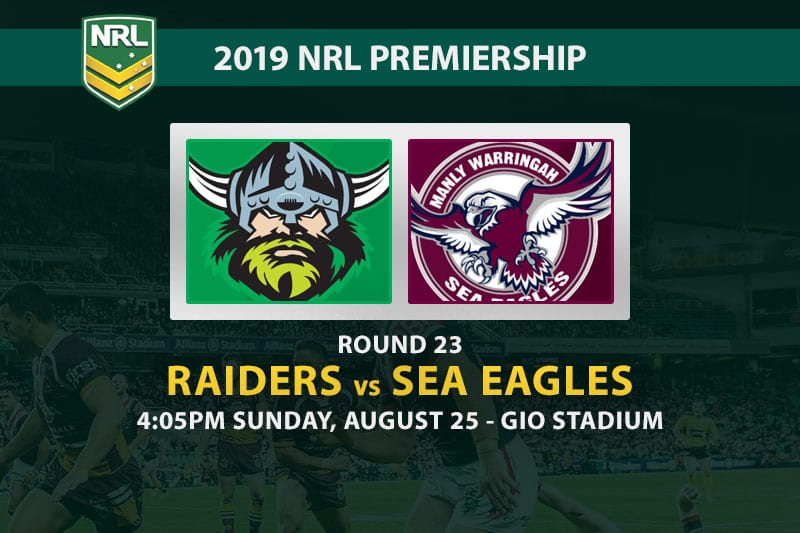 The Canberra Raiders will complete a hat-trick of top-four tussles when they take on the Manly Sea Eagles in the final game of NRL Round 23.

After a tight loss to the Sydney Roosters, the Raiders came from 18-0 down at AAMI Park last week to stun the Melbourne Storm and move a game clear in third place.

Now Ricky Stuart’s men take on a Manly Warringah side with similarly impressive form lines over the past two months.

The Sea Eagles bounced back from a flat performance against the NZ Warriors to jump into the top four with a 32-12 hammering of the Wests Tigers.

Only goal differential separates Manly from South Sydney and Parramatta, but that could change if results fall their way this week.

Joseph Tapine is out with a rib injury, so Ryan Sutton starts at lock and Hudson Young joins the interchange. Emre Guler, Siliva Havili, Michael Oldfield and Sam Williams are named in the reserves.

Out: Joseph Tapine
In: Hudson Young

Des Hasler has made no changes to the 17 that dealt with the Tigers last week. Brad Parker and Curtis Sironen are still out injured, while Lachlan Croker, Cade Cust, Tevita Funa and Lloyd Perrett are on standby.

Jordan Rapana – It has taken Rapana a while to find his scoring touch this season, but Bet365’s $9.50 first tryscorer quote is good money for a bloke who has found the line in four of his last five starts.

Reuben Garrick – Manly’s in-form winger has registered multiple tries in three of his last five games, so there is something to be said for backing him to score two or more at $7 with Sportsbet.

Both these teams are playing good footy at the right time of year. The Raiders dug deep after a poor first half against the Storm, while the Sea Eagles responded well to their blip across the ditch. Both are excellent in defence, so don’t expect a shootout. Home advantage tilts this one to Canberra.