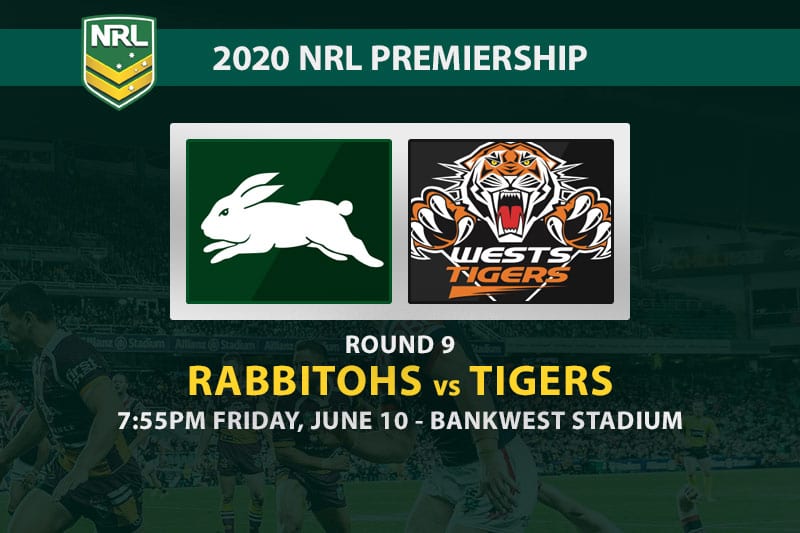 This Friday night clash shapes as a potential preview of Damien Cook vs Harry Grant later in the year in State Of Origin, but the game itself has huge significance for both clubs.

A win for either team keeps them within striking distance of the top four, while a loss could mean a few tough weeks ahead as they look from the outside in.

The Wests Tigers have shown they have enough steel to play well in patches against the best teams, but they can’t quite land the vital blow. They led 10-6 against Penrith last start and failed to score a try in the second stanza.

The South Sydney Rabbitohs have the same feel about them across the first eight weeks of the competition; they’ve smashed the bad teams while just falling short in games against stronger opponents like the Panthers and Storm.

Because of those parallels, the $2.50 head-to-head price for the Tigers feels a bit heavy and could be good value.

Whatever the result, expect the margin to be no more than 10 points. It may also be a night to take the unders on the total points line, as we can expect a greasy surface at Bankwest Stadium.

On paper, the Rabbitohs appear to have the stronger lineup even with Braidon Burns ruled out for the remainder of the season with a knee injury.

The Tigers will be without strike weapon Joey Leilua after he was suspended for four games, and he will be replaced by Michael Chee Kam.

Another fascinating plot in this contest is Adam Doueihi facing off against Latrell Mitchell, the man who replaced him at fullback for the Rabbitohs.

Doueihi has shown excellent form since his move to Wests and offers tremendous value at $19 to open the scoring, while Mitchell comes in at a best price of $13.

Best bets for Rabbitohs vs Tigers

Either team by under 10.5 points