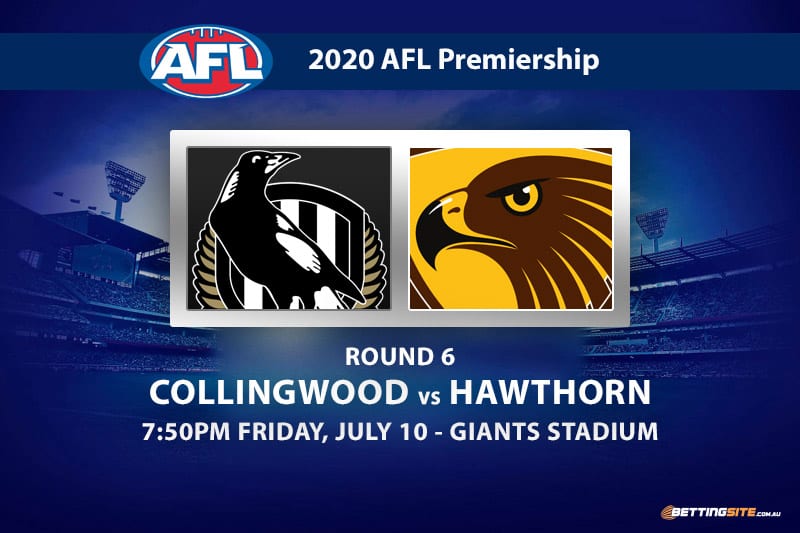 Two of Victoria’s most popular football clubs will meet at Giants Stadium this Friday night when Collingwood and Hawthorn go head-to-head in round six of the 2020 AFL Premiership.

Despite some strong performances since the restart, the Hawks and Magpies have both slid down the ladder and out of the top eight in recent weeks.

Collingwood beat St Kilda and the Western Bulldogs with ease but went down to the GWS Giants and Essendon, while Hawthorn toppled the Brisbane Lions and Richmond but lost badly to Geelong and Greater Western Sydney.

The Magpies confirmed this week that Jordan De Goey has not travelled to Sydney with the squad, which makes a big difference to their setup in both the forward line and midfield.

Hawthorn ball-magnet Tom Mitchell loves playing against Collingwood, having recorded his disposal record against the Magpies back in 2018 when he found the pill 54 times.

Alastair Clarkson and Nathan Buckley have delivered plenty of blockbusters in the recent past, and this week will be no different.

The wet weather last week made Jack Crisp look very ordinary in the loss to the Bombers, as he failed to adjust to the pouring rain. Redemption will come in spades for the Collingwood backman, who will need to use his run and carry to help the Pies beat the Hawks. Crisp had 26 touches in his last battle against Hawthorn.

Having collected 25, 26 and 28 disposals in his last three matches against the Magpies, James Sicily gets more ball against Collingwood than he does against any other side. Silicy’s strong intercept marking makes the $2.63 for 20 or more touches very appealing, especially if Adam Treloar and co. continue blasting the ball forward from contests.

Jaidyn Stephenson has booted two goals in each of his three opening quarters this season. This trend will continue against the Hawks if the speedy forward finds a starting mismatch in the goal square and gets out on the lead. The $12 for first goalscorer is also an appealing option.

The Hawks have struggled to score against well-drilled defences, as the Cats and Giants held them under 50, but Jack Gunston still kicked two and three goals in those losses. We expect a low-scoring contest where Gunston leads the way for Hawthorn with clean finishing under pressure.

Even before the shortened quarters were introduced, the last few clashes between the Hawks and Magpies were low-scoring affairs. These teams occasionally kick poorly at goal and find it difficult to score consistently throughout a match. The unfamiliar ground at Giants Stadium will also play a part, as neither team has a great record at the venue.

Having won 12 of the last 13 clashes against the Magpies, the Hawks are our choice for this Friday night blockbuster. The loss of De Goey is going to affect the Collingwood forwards heavily, while the poor form of Mason Cox makes the Pies less dangerous in the air. Chad Wingard is in great form and plays well against Collingwood, so all signs point to the underdogs.