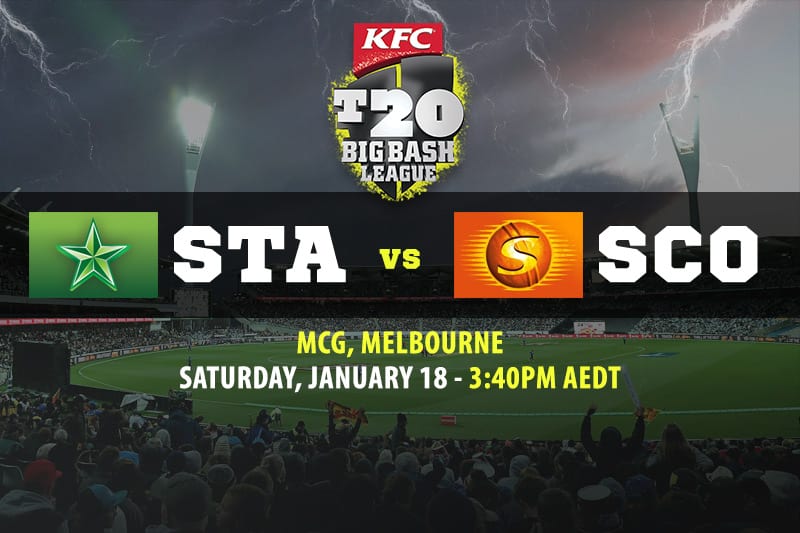 Three days after they met in the west, the Melbourne Stars and Perth Scorchers will battle again on Saturday afternoon at the MCG.

Optus Stadium was built with similar dimensions to the ‘G so that the West Australian AFL teams could practice for matches in Melbourne, but it works in terms of cricket too.

With similar long and short boundaries and rope lengths around the field, the players will – depending on weather and pitch conditions – be playing more or less the same match.

With multiple players away in India for the ODI series, both the Stars and Scorchers are playing new faces and getting results.

The Stars were runaway victors in the first clash, but can they do it again and notch their eighth straight victory in BBL09?

Marcus Stoinis Stars top runscorer
It has become a habit for us to back in Marcus Stoinis to be the top runscorer every single Stars game, and it has paid off in three of the last four contests. Even when Wednesday’s match was shortened due to rain, Stoinis had enough time to pile on 39no – 20 more than the next best batsman. Week after week teams are failing to take Stoinis’ wicket, and the Scorchers will struggle even more on the MCG.

Josh Inglis Scorchers top runscorer
Josh Inglis is a shining light for the Scorchers this season and ranks sixth in the BBL for runs scored. Inglis was a lone solider for the Scorchers in their loss to the Stars, scoring 37 of his side’s 86 runs. Optus Stadium has very similar dimensions to the MCG, so Inglis should feel right at home in Melbourne.

Nathan Coulter-Nile 2+ wickets
As a former Scorcher, Nathan Coulter-Nile will have some tricks up his sleeves for his ex-teammates. NCN was bowled two overs and took a wicket in Wednesday’s rain-affected game, but he can be much more damaging when given his full four overs.

Chris Jordan 2+ wickets
He was the top wicket-taker for the Scorchers a few weeks ago, but now Chris Jordan has fallen behind Jhye Richardson and Fawad Ahmed. The England rep still has 11 wickets from 10 matches, but he only managed a single over on Wednesday. If Jordan gets a run at it on the MCG pitch, he may create some variation that can topple a few Stars players.

Melbourne Stars to win @ $1.56 with Sportsbet
Not only did the Stars chase down the Scorchers in on a rain-stricken pitch, they bowled magnificently and gave the Scorchers no chance of victory. It’s normally the Stars batsmen that are making headlines, but it appears they have the right mix when bowling too.