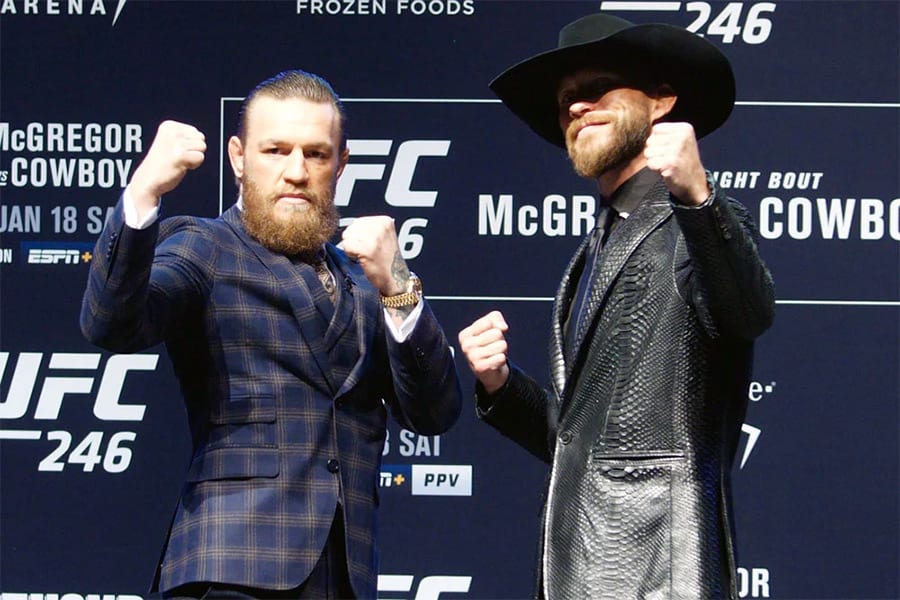 Everyone’s favourite fighter is back in the octagon, as Conor McGregor will fight Donald ‘Cowboy’ Cerrone in the Main Event at UFC 246 in Las Vegas this weekend.

Following the McGregor vs Cerrone bout will be two of the best female fighters in the world as Holly Holm takes on Raquel Pennington fighting in the Co-Main Event.

The main card also includes a heavyweight bout, a women’s strawweight bout and a lightweight belt, so there is plenty to like outside the top billers.

Here are our previews for each bout on the main card, with odds from Australia’s best UFC betting sites.

At the peak of his powers, the world believed there wasn’t a man on earth that could beat Conor McGregor. He has since met his match and lost a handful of fights, but some would still consider him the king of the octagon.

Donald ‘Cowboy’ Cerrone is the underdog due to his two straight UFC loses in 2019, but he has the power and combinations to defeat McGregor. Cerrone has the ability to knock out an opponent with a single accurate strike or slowly wind them down with a brutal combination.

McGregor has only ever lost a UFC fight due to submission, the most common method that Cerrone wins through, which makes this bout a little less predictable than the odds suggest. If Conor can keep his distance and flurry without getting caught, which has always been a strength of his, he will be able to defeat Cowboy.

We are going with the majority on this occasion as McGregor looks in good nick and has always been a beautiful defensive fighter with terminal counter attacks.

Conor McGregor by KO/TKO @ $1.53 with Sportsbet

Although best known in Australia for her impressive victory over Ronda Rousey when she looked untouchable, Holly Holm is now a genuine superstar of women’s UFC in her own right.

Raquel Pennington is a different style of UFC fighter that wins most of her bouts via decision, meaning she goes the distance more than most. With her record at 10-8, this is a must-win fight for Pennington.

Holm has the reach advantage for both arms and legs and has our tip for this matchup, as she is the more experienced fighter and has already beaten Pennington before.

Heavyweight fights are often entertaining because they can end within seconds, but here we have Aleksei Oleinik, the Russian submission expert, against another heavyweight that prefers to win via submission in Maurice Greene.

These fighters are quite different in terms of physical prowess, experience and defensive strategies. Greene will use his size and patience to win a fight, whilst Oleinik will try to constrict you immediately.

We are taking Greene because he has both five inches in height at 23 pounds in weight over Oleinik, which will make it difficult for Oleinik to win via submission.

This Latin American showdown between Brazil’s Claudia Gadelha and Mexico’s Alexa Grasso will be the fourth match on the main card.

Both female fighters have excellent records and are young enough to push those record further, especially 26-year-old Grasso.

Gadelha is ranked sixth amongst strawweight fighters, with Grasso behind her in 10th, which is why we are tipping the Brazilian to win on decision.

Claudia Gadelha by points @ $2.60 with Sportsbet

Rounding out the main card is the bout between Anthony Pettis and Diego Ferreira, two bulldogs that are in need of a victory.

Pettis has beaten one of the fighters in the UFC 246, Donald Cerrone, but he has also lost seven of his past 11 fights, with concerns for his career starting to grow more abundant.

Diego is flipping the concept of time by winning his last five matches, which is uncommon at age 34. Ferreira also upset Mairbek Taisumov in UFC 242, where he won by unanimous decision.

We like the record and form of Ferreira better than the unpredictable Pettis. That mindset is shared by online bookmakers, who have Ferreira pegged as a heavy favourite.