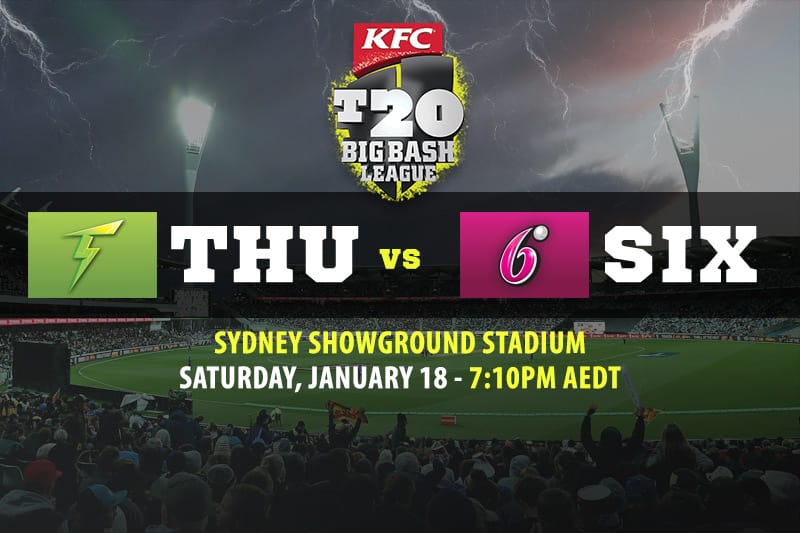 The Sydney Thunder will look for revenge on Saturday night when they host the Sydney Sixers in the T20 Big Bash League.

After their last clash went down to a Super Over, the anticipation for the sequel has been huge.

Since then, the Sydney Sixers have gone on to win three out of four matches to go second on the BBL09 ladder, while the Thunder have lost four games out of six after that one-run derby defeat.

This is a perfect match for the Green Machine to re-enter the BBL finals race, but it is also a good platform for the Sixers to edge closer to the powerful Melbourne Stars.

Callum Ferguson Thunder top runscorer
We have taken Callum Ferguson to top score because he is due to have a good innings and has previously piled on runs against the Sixers. The Thunder captain has made the eighth-most runs in BBL09 and has done so averaging 37 per innings, hitting the fifth-most fours in the competition. Pops will know the importance of this must-win game and try his best to get the Thunder over the line.

Moises Henriques Sixers top runscorer
Notice we have backed both the captains to make the most runs in this match. Moises Henriques has slowly built his form and looms as a dangerous player in the middle and later overs. We can see the Sixers skipper making over 30 runs with ease, pushing for a half century. Moises was the clutch player in the Super Over earlier this season and could be the difference again.

Liam Bowe 2+ wickets
With Chris Green suspended for an illegal bowling action and Arjun Nair not in the side, Liam Bowe has come in and taken three wickets in seven overs. A former Melbourne Stars player who had few chances with the likes of Adam Zampa and Sandeep Lamichhane in the side, Bowe is a capable spinner whose unpredictability could cause the Sixers some problems.

Tom Curran 2+ wickets
It is much harder to be a good bowler than a good batsman in T20 cricket, and Tom Curran is one of the best bowlers going around. He will need to get through the tough top order, but Curran is a reliable wicket-taker once he gets in the game. He took two against the Thunder in their Super Over classic and will do it again on Saturday.

Sydney Sixers to win @ $1.90 with Sportsbet
Derby games are never easy to pick, but the Sixers have all form on this occasion. They should get the job done against a Thunder outfit that has only won four games this season.