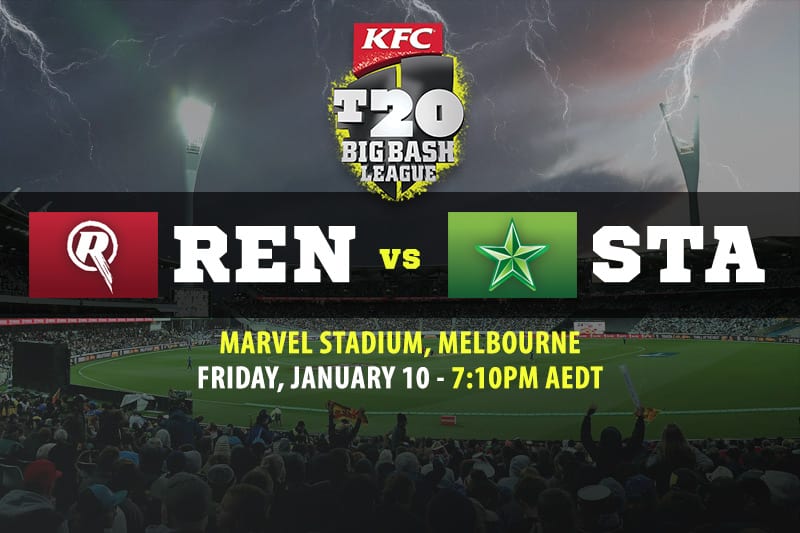 The Melbourne Renegades will hope to notch their first win of BBL09 when they take on the Melbourne Stars for the second time this season.

Although it took the Stars 18.5 overs to catch the Renegades’ total when they clashed at the MCG on January 4, they were in complete control for the entire innings and only lost two wickets.

This time the men in red will have two new players on their hands, as Andrew Fekete and Samit Patel will join a squad that is desperate for an injection of fresh bowling talent.

While the Renegades sit dead last after seven consecutive defeats, the Stars have won six out of seven games to bolt into outright favouritism in Big Bash League title betting.

Form is often irrelevant when two local rivals meet on the field, and there is rarely a dull moment when the BBL’s two Victorian franchises face off.

Shaun Marsh top runscorer @ $4 with Sportsbet
Although it has been an abysmal season for the Renegades, Shaun Marsh has been a shining light. The West Australian star made over 40 runs for the Renegades in the last match against the Stars, where he was the only batsman that looked comfortable at the crease. Expect Marsh to continue toiling away and making runs.

Marcus Stoinis top runscorer @ $3 with Sportsbet
It is becoming harder and harder to look past Marcus Stoinis with each game he plays, as the powerful T20 opener just keeps piling on the runs. With a massive average of 70 runs per game, Stoinis is on track to win the Golden Cap, which is awarded to the player with the most runs at the end of the season. The Renegades couldn’t get Stoinis out in the last clash, as he made 68no and led the men in green to victory.

Andrew Fekete top wicket-taker @ $6.50 with Sportsbet
Mid-season signings are more than welcomed in the BBL, and the Melbourne Renegades have brought in two players. Andrew Fekete is one of the players that will come in for the Renegades, and we expect an instant impact from the fast bowler. Fekete has previously played for the Brisbane Heat and Sydney Thunder in the BBL, taking eight wickets in 12 games.

Haris Rauf top wicket-taker @ $3.60 with Sportsbet
There isn’t a single bowler in the BBL that is as dangerous as Haris Rauf, but rules and regulations surrounding international players mean he has played only three games this season due to Dale Steyn’s stint with the Stars. Now that he has a clear run as the top bowler, Rauf will add to his 10 BBL09 wickets against the struggling Melbourne Renegades.

Melbourne Stars @ $1.71 with Sportsbet
As we have mentioned many times in the past, the Renegades are clearly not up to scratch this season and will struggle tremendously until they get their first win, which will not happen against that Stars in this upcoming Victorian derby.