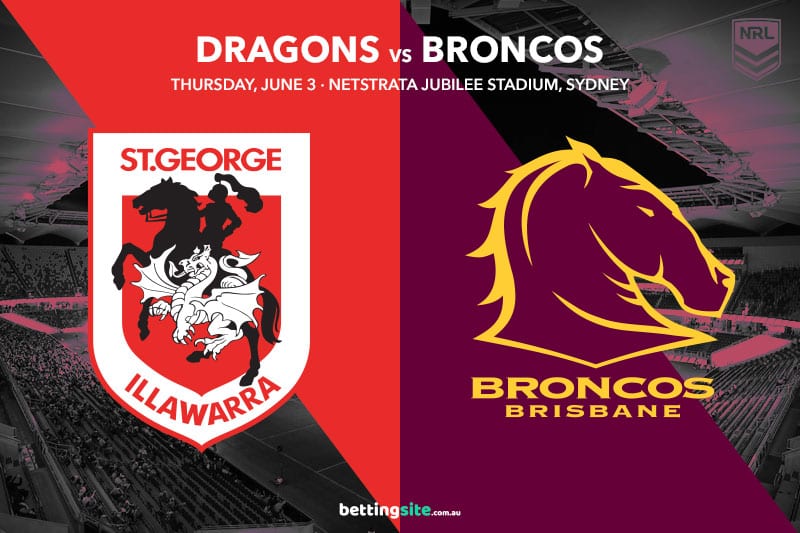 Netstrata Jubilee Stadium will play host to the opening NRL game of Round 13 on Thursday night when the Brisbane Broncos head south to take on the St George Illawarra Dragons.

The Red V have lost six of their last seven games but will have Ben Hunt and Corey Norman both available for selection, with both failing to receive a call-up to the Maroons squad for State of Origin. However, Tariq Sims’ selection for New South Wales will test the forward depth of the Dragons.

Despite Brisbane boasting fewer Origin players than any other time in their history, they are without two big names. Payne Haas and Xavier Coates are two of the Broncos’ best week in and week out, and replacing their output is going to be difficult as Brisbane look to win their first game at Kogarah in 20 years.

Against the Sharks without a bulk of their top side available, the Dragons were beaten in golden point even though many believe they were the better side on the night. Last week against the Tigers, they were blown away in the opening exchanges and never stood a chance. Who knows what they will throw out this week?

The Saints will be without Tariq Sims, Zac Lomax, Josh McGuire and Tyrell Fuimaono this week, but they should get Josh Kerr and Mikaele Ravalawa back into the starting side. Matt Dufty’s troublesome shoulder will mean he might not be a confirmed starter until an hour before kick-off, and his inclusion in particular could swing the betting markets late.

If Dufty is absent, St George Illawarra’s head-to-head price will blow out, and for good reason. Without him against the Tigers, the team lacked spark when the game was still in the balance, which effects the -46.5 total points line (back the unders). The 1-12 margin at $3 is the most likely outcome if you fancy the Dragons, but regardless of the final result, Jack Bird to score a try against his former club will be one to put in your multis.

With no Xavier Coates in the line-up for the Brisbane Broncos, just who do we look to in the tryscorer betting? Herbie Farnworth is the outside back who might throw up the best price, but David Mead might be the best man to take if you’re looking for a sure thing. Mead is enjoying a nice return season in the NRL and both of the Dragons’ defensive edges were all at sea last week, so even accounting for a potential reshuffle in the back line, the PNG international is going to get some chances to cross the stripe.

Brisbane already have the biggest upset of the season to their name, and they should feel as though they can get another one at the $2.75 price. The 5.5 line points to a close game, so the $4 for a 1-12 win is a market Broncos fans should jump all over. They will get Matt Lodge, Jordan Riki and Tyson Gamble back into the side, and Kotoni Staggs could be a surprise inclusion to play his first game of 2021.

Dragons coach Anthony Griffin is set to call up Jack de Belin for his first NRL game since September 2018, after he was stood down by the game’s governing body. He played just over 40 minutes against the Wests Magpies in his return to competitive football, but the game he left is almost unrecognisable to the one he is about to step into. Tevita Pangai Jr is going to make sure de Belin knows he is in a battle, and when they lock horns it will be worth watching. Pangai got under the skin of Victor Radley a few weeks ago when the Broncos got the win over the Roosters, and he will no doubt go after a player who has been a controversial figure in the last three years.

The poor performance against the Tigers left us feeling bad about the Dragons, so we are going to back the Broncos to end their 20-year drought at Netstrata Jubilee Stadium at the 1-12 margin. The inclusions for the Broncos make them a strong outfit for an undermanned St George Illawarra side, and Matt Dufty under an injury cloud makes it hard to back the Saints.

The Broncos to win by 1-12 points with David Mead to score at any time can get you a handy little $6.75 return at Sportsbet.com.au.