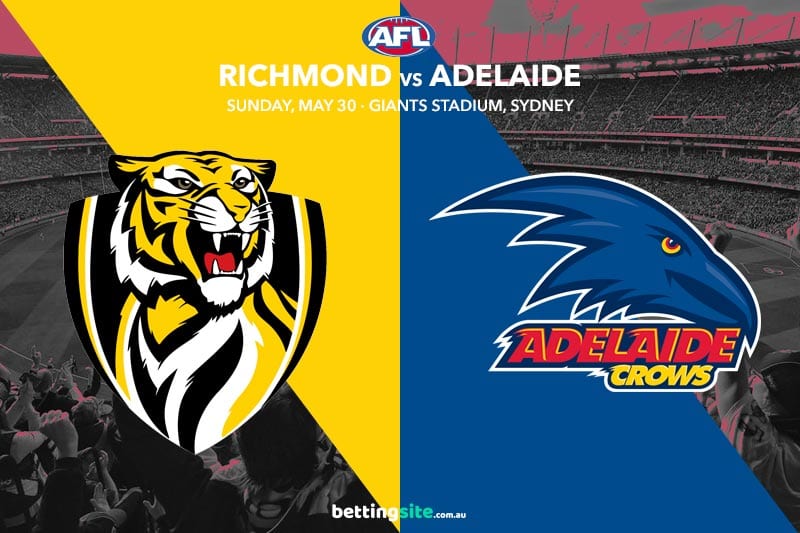 Richmond and Adelaide were scheduled to meet at the MCG on Sunday afternoon, but the COVID outbreak in Melbourne has forced the AFL to move the Round 11 clash to GIANTS Stadium in Sydney.

The Tigers travel north bolstered by the return of Trent Cotchin, Shai Bolton and Dion Prestia from injury, but they have lost Tom Lynch for up to two months with a knee injury that will require surgery.

Adelaide are set to welcome back dashing flanker Will Hamill from an ankle injury as they look to build on a one-point victory over the previously undefeated Melbourne.

Online bookmakers have installed Richmond as $1.32 favourites despite Lynch’s injury and the venue change, while the Crows are $3.50 outsiders to take another scalp this week.

Richmond come to GIANTS Stadium sitting on an even keel at 5-5, and a win against the fledgling Crows is a must if they are to stay in touch with the top eight. The loss of Lynch will hurt the Tigers’ scoring ability, but the additions of Cotchin, Bolton and Prestia will allow Dustin Martin to spend more time forward.

Although they were aided by some controversial umpiring decisions, Adelaide showed last weekend that they can put in a strong four-quarter performance on their day. With the likes of Rory Laird, Ben Keays and Paul Seedsman providing great run from midfield and penetration into the forward 50, the Crows could give the Tigers backline plenty of headaches on Sunday afternoon.

The return of Richmond captain Trent Cotchin could not have come at a better time for the reigning premiers. With the absence of Tom Lynch, Dustin Martin is now expected to spend more time inside forward 50 and Cotchin will be back in the midfield leading the Tigers into the top eight. Standing out for Adelaide is the resurgent Ben Keays, who is starting to become a key cog in Adelaide’s engine room. The former Lion is coming off a career-high 34 touches and two goals, so Cotchin and co. cannot afford to ignore him.

Richmond have not been quite as scary a prospect this season compared to the past three of four years. Adelaide are coming off their best performance of the season when ending Melbourne’s undefeated streak, and we think they can give the reigning premiers a run for their money. The Tigers have failed to cover the line on six of the past seven occasions they have started as favourite.

Shai Bolton returns from a two-week layoff with a wrist injury and will be looking to pick up where he left off in what has been a career-best season. Prior to his injury he had 20+ disposals and three goals against both the Western Bulldogs and Geelong. Damien Hardwick will be hoping for a similar output from Bolton this week in what shapes as a tricky matchup for his team.

A side of Richmond’s calibre should beat Adelaide, but the Tigers are quickly becoming a side we are finding hard to take on trust. The Crows will prove to be no easy beats, but the likes of Shai Bolton and Jack Riewoldt should give them a few issues inside 50.