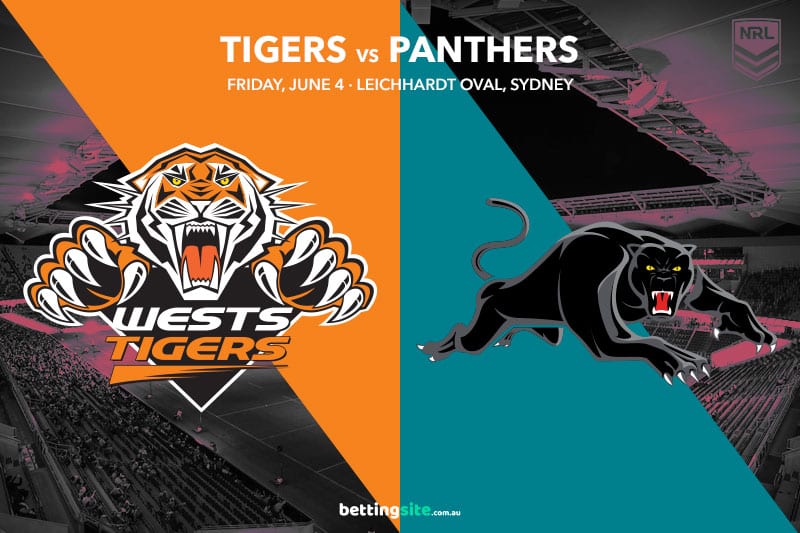 The Wests Tigers won’t get a better chance to topple the undefeated Penrith Panthers than when they meet at Leichhardt Oval this Friday night in Round 13 of the 2021 NRL Premiership.

The Tigers have only Joe Ofahengaue unavailable on State of Origin duty, while Penrith will be without Nathan Cleary, Jarome Luai, Brian To’o, Liam Martin, Apisai Koroisau and Kurt Capewell.

As a result, the Tigers are getting shorter and shorter in the head-to-head market and the Panthers are drifting to their biggest price all season, but that could mean it is the one time to get a great value return on the league leaders.

This rivalry has heated up in recent years following Ivan Cleary’s acrimonious departure from the Tigers to return to Penrith, but despite that fuel on the fire, it is the Panthers who have managed to win eight of the last 10 clashes between the two clubs.

The Wests Tigers have no excuses not to put in a winning performance against the Origin-ravaged Panthers. They’ve been dealt an enormous stroke of luck, but when expectation hovers over the Tigers, it usually ends poorly. They have all but a full squad of players to choose from, so if they are unable to get their fifth win of the year this week, it is going to leave the players frustrated and their fans embarrassed.

James Roberts looked more comfortable on the wing and as a result bagged two tries against the Dragons. Can he get back on the scorer’s sheet marking up against Robert Jennings? An even $2 for Roberts to score a try at any time is a price punters should get around.

The $4 on offer for the 1-12 margin is going to be the way to go if you fancy the Tigers stepping up to the plate to get the win. Penrith’s defence is still going to hold up despite the stars missing.

Most online bookmakers have the undefeated Panthers in the $1.50 range, but that price could be closer to even money by the time kickoff arrives. Their starting 13 is still a reasonably strong outfit, but once they get to the interchange, it starts getting thin on experience in a hurry. The conditioning of the Penrith squad has been one of the features of their sustained run of excellence over their last 30 games, so Ivan Cleary may not look to put huge minutes into a bench that has 13 total games between four players.

Matt Burton will move to his preferred position of five-eighth and will be the focal point in attack for Penrith. Dylan Edwards, Mitch Kenny and Tyrone May aren’t noted creative players, so Burton is where the points will come from.

Viliame Kikau at $15 as a first tryscorer bet is always a favourite to get on for Panthers fans, but one feels that in a week with so many missing, he will be the man to step up on an edge. Charlie Staines over on the right at $8.50 is going to get an enormous amount of cash, and don’t sleep on Paul Momirovski as an anytime option for a bit of value at $2.75 in your multis.

James Fisher-Harris is the key man in almost every game he plays, but with a second-choice playmaking spine behind him, he is going to have to find another level. His form in 2021 has been absurd and the Penrith Panthers pack have been dominant in almost every game this year, so who will step up to oppose him? James Tamou doesn’t have the young legs to go with his former teammate, so Alex Twal is going to have to take on the challenge of trying to limit the impact of the New Zealand international.

Matt Burton will be the star of the show as Penrith win their 13th game in a row. The 1-12 margin at $3 is the one time you’ll get that price on the Panthers this year, and they still have enough strike across the park to get the win over a team who lack consistency.

Penrith 1-12 with Stephen Crichton, Charlie Staines and Daine Laurie to all score a try is well and truly in play at $26.25 with Sportsbet.