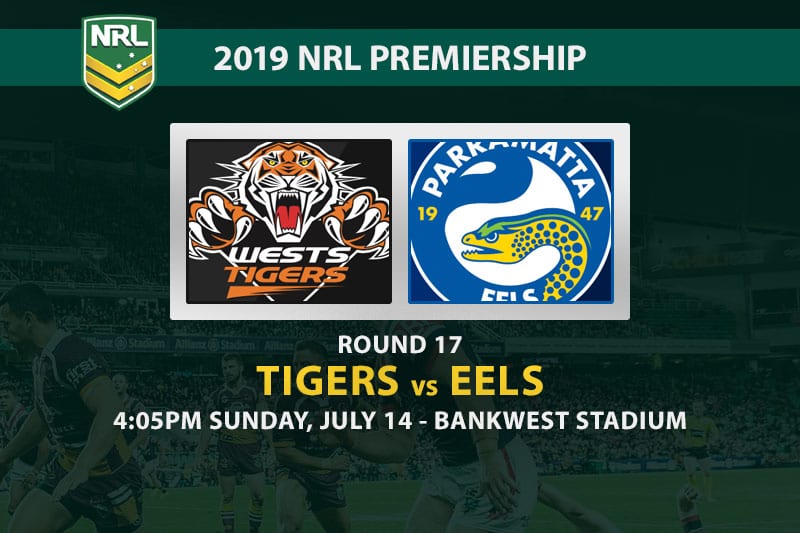 In a weekend of milestones, Benji Marshall will play his 300th game of NRL footy when Wests Tigers take on the Parramatta Eels this weekend.

Michael Maguire’s men went down to the Sydney Roosters last time out, but there are signs of improvement and finals are very much in play.

Now they meet a Parramatta side that went into last week’s bye round in excellent spirits after consecutive wins over the Brisbane Broncos and the Canberra Raiders.

Both these teams call Bankwest Stadium home and only two points separate them on the ladder, so there should be plenty of local interest in Sunday’s derby.

Queensland rep Moses Mbye is named to start in the centres, thus pushing Paul Momirovski into the reserves. Also on stand-by is Josh Reynolds, who has not featured in first grade since round seven.

The Eels have opted for the same 13 that beat Canberra last time out. The only change is on the bench, where Marata Niukore replaces Peni Terepo.

Corey Thompson – The Wests wingers have struggled to find the line in recent weeks, but Thompson has scored two tries from his last four starts at fullback and looks a good chance to hit the scoresheet at some stage.

Maika Sivo – It was Blake Ferguson who bagged a brace in the win over the Raiders two weeks ago, but Sivo leads the competition with 12 tries for the year and poses a threat regardless of how the Eels are playing.

It is a question of whether Parra can avoid the schoolboy errors that have dogged them all season. Their best is brilliant, but they give up more points per game than any other team in the top 11 places. The Tigers are more disciplined but don’t have the same kind of firepower in the back half, and that may be the difference.