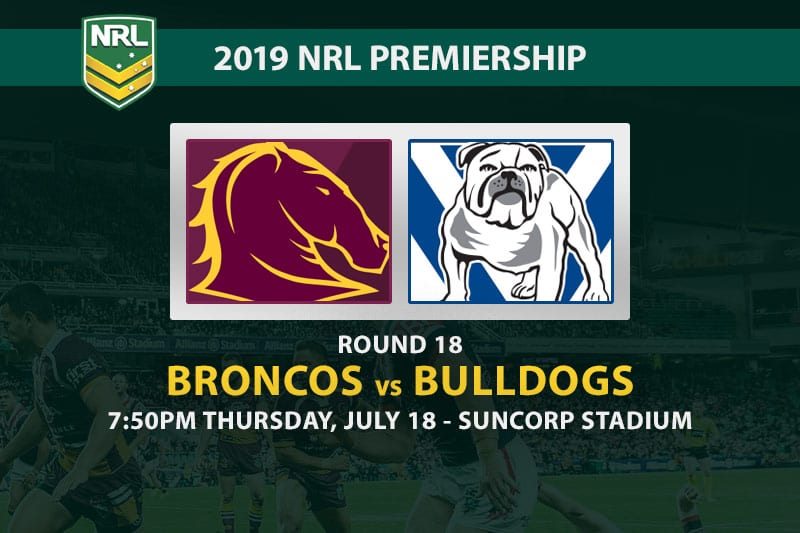 There are signs of life in the Brisbane Broncos camp ahead of Thursday’s NRL clash at Suncorp Stadium.

A rare draw with the New Zealand Warriors last week leaves Anthony Seibold’s men in 13th place on 15 points, a game and a half out of eighth place.

But with the likes of Cronulla and Newcastle struggling for form and fitness, a few good outings over the next month could see the Broncos vault into finals contention.

First they have to deal with a Canterbury Bulldogs outfit that has found some form out of the blue.

Having spent much of the year propping up the ladder, Dean Pay’s charges stunned the Sharks and the Knights either side of the bye to claim their first back-to-back wins of the season.

Those results also saw the Doggies climb out of bottom place, and another win in Queensland would put a sizeable gap between themselves and the wooden spoon.

Corey Oates needed a spell after the State of Origin series, but the big winger is back for this week’s must-win clash. His return sees Jamayne Isaako move to the left flank, while Xavier Coates drops to the reserves.

Sauaso Sue and Aiden Tolman are out injured, so Ofahiki Ogden starts on the front row and Danny Fualalo joins the bench. Adam Elliott is named at lock, with Chris Smith completing the interchange.

Corey Oates – Only four players have scored more tries this season than Oates, who has 10 to his name. The Queensland winger should be ready and raring after a well-earned rest.

Will Hopoate – Canterbury’s resurgence has coincided with a hot streak for Hopoate, who has scored tries in three consecutive starts – including the team’s first against both Cronulla and Newcastle.

If the Broncos lose this, they can forget finals. If they win, however, results elsewhere could put them right in the mix. The Dogs are playing with real intent and will take the game to Brisbane, but the home side should get the job done with the likes of Isaako, Milford and Oates back in action.