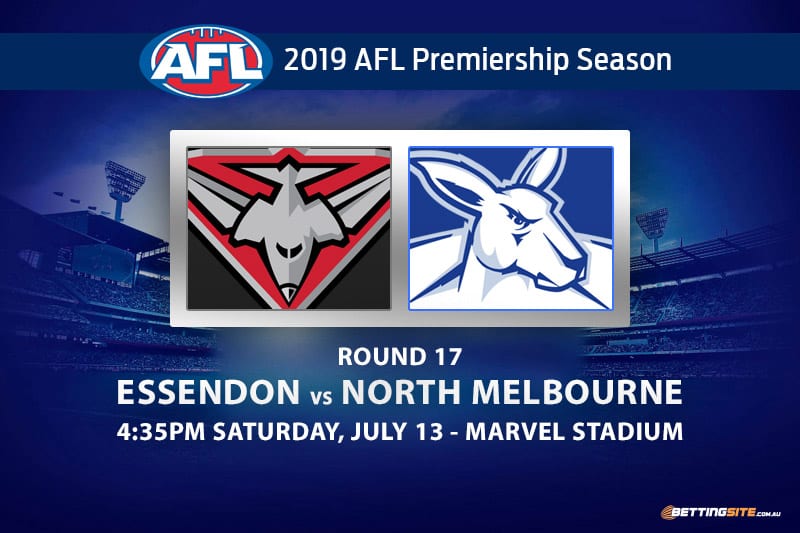 Two teams with the ambition of playing finals in 2019 will clash at Marvel Stadium this Saturday afternoon.

The Essendon Bombers and North Melbourne Kangaroos are two of the in-form clubs in the AFL, as both sides have won four of their last five matches.

The only other teams to match that record in the last five weeks are the second-placed West Coast Eagles and the fourth-placed Brisbane Lions.

Dyson Heppell has soldiered on heroically for the Bombers all season, but now he will sit out with an ongoing foot niggle.

The Bombers will need to make up for their captain’s absence with a strong performance in the midfield, where they had a few issues against Sydney last week.

North Melbourne has been one of the best teams to watch since Rhyce Shaw took over as head coach, mainly due to a revitalised tough mentality.

The Roos are brutal without the ball and hunt the opposition, a basic plan that has put the club in contention for a spot in the top eight.

If recent encounters are anything to go by, this match is going to be one of the most interesting contests of the round.

David Zaharakis to get 25 disposals @ $2.30 with Sportsbet
With the Essendon skipper set to miss this huge clash, there is plenty of room for other Bomber midfielders to shine. Zaharakis played his 200th match not long ago and is performing at a consistently high level. His efforts are often underrated even though he gets the job done each week.

Jack Ziebell to get 25 disposals @ $1.91
The captain of the Roos has been thriving in the past month of football, which has mirrored the success of the club. Ziebell is a very capable inside midfielder that can win a hard ball at will. With Dyson Heppell injured for the Bombers, expect Jack to play very well.

Bombers vs Kangaroos Round 17 goalkicking odds

Jake Stringer to kick two goals – Best odds at Ladbrokes
Stringer has recovered from a lower-leg injury and is back as the main man in Essendon’s forward line. He kicked two goals against the Swans last week and could have had more. With another week of training under his belt, Stringer will be primed to face the Roos.

Ben Brown to kick three goals
Brown’s radar went wonky for a few weeks, most notably when he kicked 0.4 in the recent win over Collingwood, but he was back on target last Sunday with three goals against the Saints. Nick Larkey and Cameron Zurhaar both kicked five in that game, which proves Brown can impact the scoreboard in a supporting role.

Over 165.5 total match points @ $1.57
The total match points average for the last three encounters between Essendon and North is over 210 points, which is one of the highest averages in the league. The speed of Marvel Stadium due to the closed roof will benefit both parties, resulting in another high-scoring affair.

Bombers vs Kangaroos Round 17 match predictions

One statistic that North Melbourne has led the AFL in since round seven is scores from turnovers. The Roos are lengths ahead of the next-best team in this department. If Essendon tries to play its dangerous style of footy, it will fall short against the hunting mentality of the Roos.