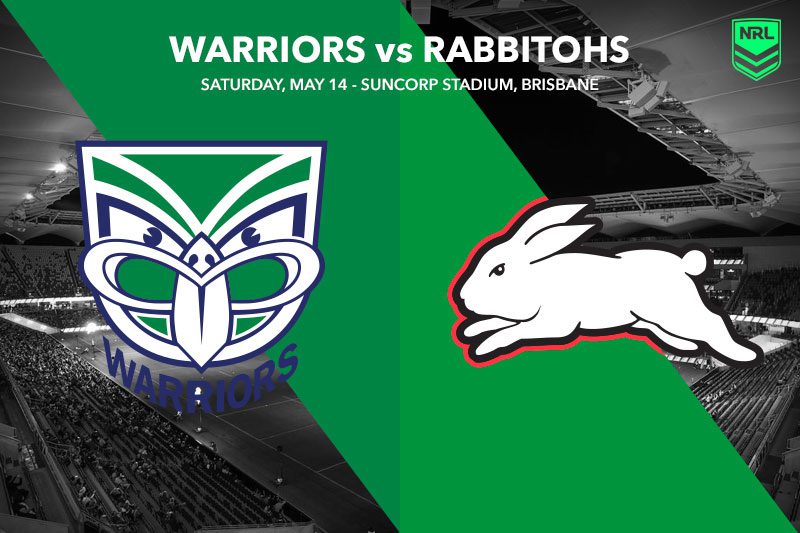 South Sydney Rabbitohs will enter day two of the NRL’s Magic Round as favourite to defeat New Zealand Warriors at Suncorp Stadium on Saturday afternoon.

Souths are coming off a 32-12 loss to the Broncos where they were largely outplayed across the park. Meanwhile, the Warriors’ recent turbulence hit a new low point when they put in one of the worst performances in recent memory last outing.

The Warriors failed to beat a Sharks side that was one man short for 60 minutes, and two men short for 10 minutes. Both sides will need to put in much better performances this weekend or risk derailing their NRL season entirely.

It will shock no one that the Warriors have drifted from as short as $2.65 out to as long as $3.10 with Australian online bookmakers. Souths are fluctuating between $1.45 and $1.35 and will start this clash a warm favourite.

Of 35 clashes between the clubs, Souths have won 18 of them. The Souths have also won their last two clashes by a total of 100-34. But Souths have lost their captain and forward leader Cameron Murray through injury.

In contrast, the Warriors gain a forward leader and captain in Tohu Harris, who returns to the second row. The Warriors will need every bit of leadership Harris has to offer, and in partnership with Shaun Johnson, he could provide enough of a boost to get the Warriors a much-needed win. Should the Warriors go on to win, it would only be by a short margin, making the $3.70 price for the 1-12 point win a great value play.

Dallin Watene-Zelezniak has scored four tries in his four appearances this season, and in his lone appearance for the Warriors against Souths, he has scored a try too. While the Warriors were poor collectively last week, DWZ had two tackle breaks and a line break to go with his try, proving he is a threat on the Warriors’ right-edge attack. DWZ will mark up on Alex Johnston and Jaxson Paulo, with Paulo already dropping in and out of the Souths side due to issues with his form. DWZ is a smart choice as an anytime tryscorer for this match at $2.35 with Ladbrokes Australia.

Both Souths and the Warriors have had incredible issues with scoring points, despite the calibre of attacking players each side possesses. Shaun Johnson has had multiple halves partners in a spine with Reece Walsh, while Cody Walker is struggling and seems the key to Souths’ success more than ever this season. It’s very hard to see the total match points for this clash exceeding 38 points, especially considering the horrible weather in Brisbane currently.

Both these halves have had their own issues in this season to date and will have an uphill battle to conquer them here. Shaun Johnson is clearly lacking the game management skills that a player of his age and experience should have, while Lachlan Ilias is struggling to be the orchestrator of the Souths spine that is failing to score points this season. Both halves are almost carbon copies of each other, and will require the smarts and game management skills a halfback should have to lead their side to a win. Whoever can direct their side around the park and kick better on Saturday should prove enough to get a win for their side.